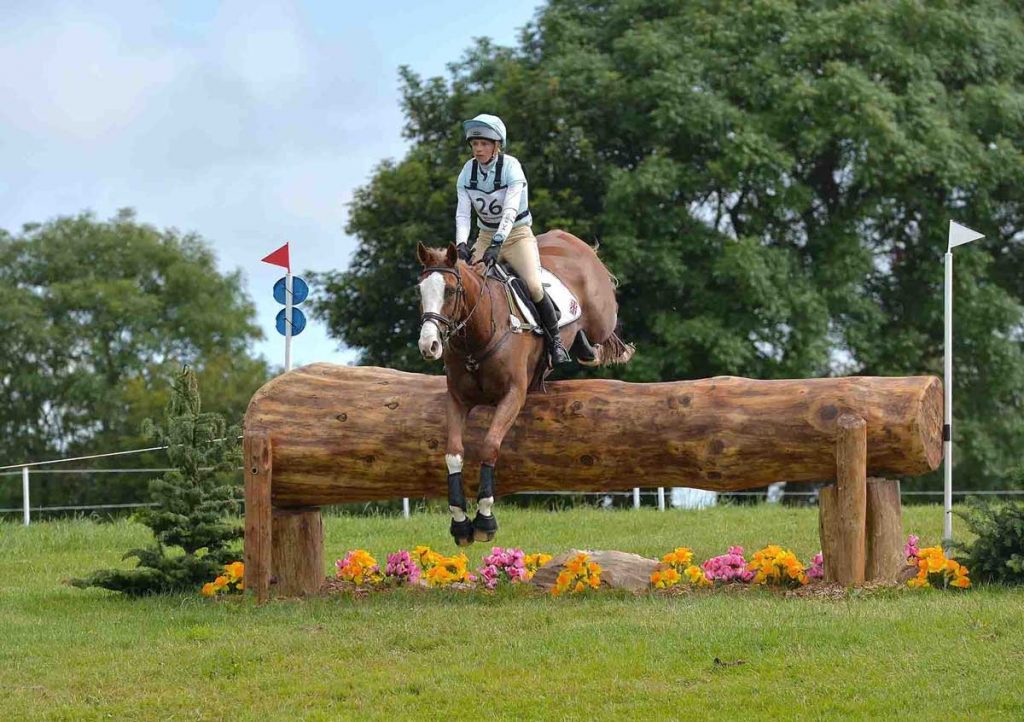 Great Britain’s Izzy Taylor emerged victorious in the feature class at the Fernhill Sport Horses Kilguilkey International Horse Trials in Co. Cork following the conclusion of the Haygain CIC***. Riding Miss Alex C Phillips’ ‘Perfect Stranger’ the first-time visitor to Kilguilkey added just two cross country time penalties to their dressage score to complete on 45.7 penalties. Last to leave the start box in the class having had mixed results with her first two rides, the Oxford-based rider was full of praise for the Mike Etherington-Smith designed Cross Country course. ‘I’d never been here before so didn’t know what to expect,’ she said speaking at the prize giving. ‘ Mike and Danny [Dulohery] have done an amazing job and my horses have had a good spin and come out of it learning a lot.’

Time proved influential with leader after dressage and showjumping, Blyth Tait (NZL) and ‘Darius IV’ picking up 8.8 time penalties for an eventual 4th place while Meath rider Sarah Ennis had to settle for second place with ‘Horseware Stellor Rebound’ after incurring 5.6 penalties across the country. Joseph Murphy took third place with ‘Sportsfield Othello’ while Cork-based British rider Sian Hawkes recorded the only double clear round in the class with ‘Kilroe Hero’ to finish sixth in the final rankings.

In the TopSpec CIC**, British rider Rosie Fry recorded her first win on Irish soil with Mr. Richard Fry’s ‘Arise Cavalier;’ keeping a clean slate in both jumping phases to complete on their dressage score (37). Speaking after her win, Fry said ‘We heard good things about the event from a few Irish people and decided to come over. The cross country rode really well with a few decent questions but my horse made it feel easy.’

The battle for second place became a truly international affair with New Zealand visitor Blyth Tait and American Kim Severson tied on the same score (39.2). The final placings were determined by the rider closest to the optimum time (5:49) which proved to be Tait; the former World Champion and multiple Olympic medallist with ‘Havanna Van T Cataneahof’ while Severson took third with ‘Cooley Cross Border.’ Limerick rider Robbie Kearns proved to be the best of the Irish when taking 5th place with ‘Garrybritt Bonny’ (46.7).

Ella Boyle made her journey from Co. Down worthwhile when she took the honours in the Global Event Horses CIC1* with Amanda Boyle’s ‘Candy 737.’ Leading from the opening phase, the combination completed on their dressage score (37.7), ahead of Michael Ryan and Briarhill Marco (41.1) and Sarah Dowley with Shannondale Dita in third (41.3). Kilguilkey also played host to one star classes for Juniors and Ponies supported by Eventing Ireland. With the FEI European Eventing Championships for Young Riders and Juniors getting underway in Millstreet in two weeks time, all eyes were on the potential team and individual contenders. At the request of the team selectors, the competition at Junior level followed the CCI format, with the final results being decided in the show-jumping arena on Sunday afternoon. Kildare’s Alex Power emerged on top with ‘Millridge Cara’ finishing on their dressage score (40.7) while Sofie Walshe (Kinsau) and Anna Kelly (Something Special VI) completed the podium placings. At pony level, the European Championship contenders will have a long journey to Turkey this year. Hoping to join them will be Kildare rider Zara Nelson who recorded brilliant double clears across the country to take the red rosette with ‘Knockbordan Revelation’ (44.5) and third place with ‘Millridge Buachaill Bui.’ Sadhbh Peelo Stassin occupied second place on the leaderboard with Newtown Westie, passing through the cross country finishing flags just one second over the optimum time to complete on 46.4 penalties.

2017 marked the fifth running of the Fernhill Sport Horses Kilguilkey International Horse Trials and at the prize giving ceremony, riders and visiting remarked on the continuous developments and upgrading of the Co. Cork venue into a top class international equestrian facility.

Organisers and landowners, Danny and Michelle Dulohery are extremely grateful for the support of new sponsors Top Spec and Global Event Horses, together with Fernhill Sport Horses, Haygain, Eventing Ireland and a long list of fence sponsors, contributors and supporters.