Adventure De Kannan, the ride of Irishman Trevor Breen, has an extraordinary record at the All England Jumping Course, winning many of Hickstead’s most famous classes. He has continued to win at the top level even after an operation to remove his right eye in 2013, which led to his nickname ‘the one-eyed wonder horse’.

The Irish Sports Horse gelding made his international debut at Hickstead in 2009, scoring his first major win in the British Speed Derby. In 2012, Trevor and ‘Addy’ won the MS Amlin Eventing Grand Prix at the Longines Royal International Horse Show, back when the class featured showjumpers and event riders going head-to-head round a course of showjumps and cross-country fences. That same year, they claimed the All England Grand Prix at the national show in September, and finished third in the Hickstead Derby itself.

In 2013, just a few months after the operation to remove Addy’s eye, Trevor came a step closer to achieving his Derby ambition when finishing runner-up behind Phillip Miller. The rider once described the result as ‘the worst second place I’ve ever had’. The tables were turned twelve months later when both Trevor and Phillip completed the Derby on four faults and had to jump off against the clock. Both finished on four-faults yet again, but Trevor finished two-hundreds of a second quicker to claim the title in what was the closest jump-off in Derby history.

Their run of success continued that summer, when Trevor and Addy claimed the prestigious Queen Elizabeth II Cup, a national championship held on the Saturday of the Longines Royal International Horse Show.

Addy’s achievements will forever stand out in Hickstead’s history books, as the only horse to win the Speed Derby, the Eventing Grand Prix, the All England Grand Prix, the Queen Elizabeth II Cup and the British Jumping Derby.

Adventure De Kannan is 17 this year and a decision has been made between Trevor and Addy’s owner, Karen Swann, to retire the horse from international showjumping. Karen produced Addy in his younger years, eventing him up to two-star level and showjumping up to 1.20m in Ireland, before Trevor was given the ride when Karen was expecting her first child. Addy would still return home to his owner each winter for an annual holiday, and during these winter breaks, Karen and Addy successfully competed in one-day events and combined training competitions. Now Adventure De Kannan will continue to enjoy an active retirement with Karen, back at her home in Co Tipperary. 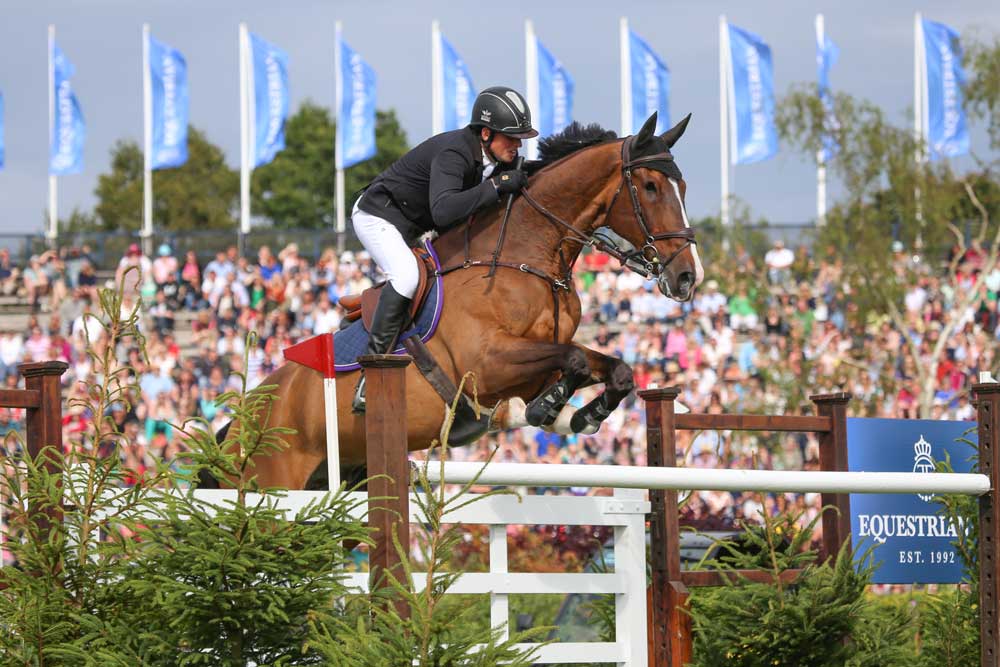 Though Trevor is sad that the partnership is coming to an end, he felt it right to call time on Addy’s amazing career. “I didn’t think it was fair to him to keep going, and I don’t want to be unfair to a horse who has given me everything,” he says. “He’s helped me so much in my career and won so much for me. I want to retire him at the top.”

There will be an official retirement ceremony ahead of the Al Shira’aa Derby on Sunday 25 June. “I’m obviously going to be extremely sad when he retires, but I’m also going to feel proud,” said Trevor.

A retirement ceremony in Hickstead’s famous International Arena is an honour granted to very few horses – the last to be retired in this way was William Funnell’s triple Derby winner Mondriaan in 2011.

“Addy deserves to have one last moment of glory here at the showground where he made his name,” says Hickstead Director Lizzie Bunn. “He’s gathered a legion of fans thanks to his achievements here. Addy has overcome several setbacks to become a multiple Hickstead champion, and he will always be remembered for his consistency and brilliance. We’ll be sad to say farewell, but he definitely deserves a long and happy retirement.”

Tickets for the Al Shira’aa Hickstead Derby Meeting are on sale now at www.hickstead.co.uk.

Small scale horse breeding… the ins, the outs and the whys!

Finding and breeding the champions of the future