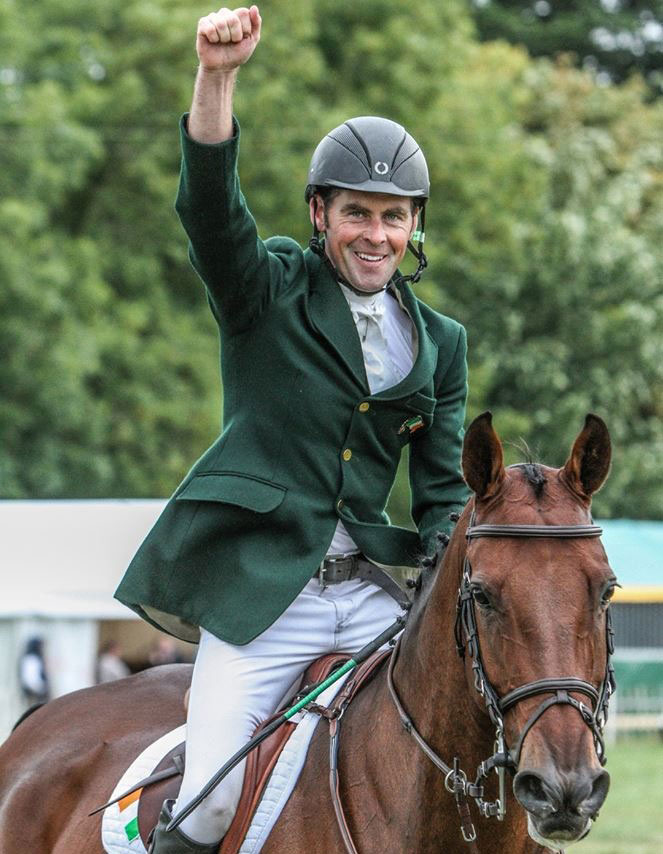 On the national front the team have enjoyed great successes with our string and for the third year running I am Eventing Ireland’s leading rider, which is an achievement I’m very proud of.

However, horses the best levellers and eventing is a tough sport … and we’ve had mixed results internationally.

The season started with early runs at Burgham and Ballendenisk International and we had good top ten placings. Sportsfield Othello (Franky) put in a good, solid performance at Badminton and is improving all the time on the flat. At Burghley in September he scored a personal best for a 47 after dressage, to leave us in a really competitive position. As a result, we had mixed feelings when we got the last-minute call up for the European Championships at Blair as he is a machine cross country and I felt Burghley’s tough condition would have been right up his street. But the Irish team’s needs come first and it’s always a great honour to carry the Irish Flag, so we made the journey to Scotland.

Unfortunately, Blair did not go Ireland’s way and certainly not ours!! We were out on the course as path finders for the team and were up on the clock, when 2 minutes from home we had an uncharacteristic fall. This is the only time I have had a fall with Franky in his eventing career, so it was particularly frustrating.

Having watch the video I don’t think I could or would have ridden it differently. The time proved influential and though we were fast and up on the clock, he was taking everything in his stride and still running well within himself.

I think he actually misread the dimensions of the infamous ‘Tatties and Haggis’ fence, which later went on to claim faller after faller until eventually an element of it was removed. That’s horses and eventing for you – it’s a tough sport but it’s not meant to be easy!!

Being part of the first ever Irish eventing nation cup team at Boekelo in October was really special. WestWinds Hercules put in a solid performance, jumping one of only 6 showjumping clears on the final day. I really rate this horse and think there is a lot more to come from him.

My Olympic partner, Electric Cruise AKA Sparky, has had a mixed year and feel we have got to the root of his problems. He is such an amazing jumper and proves this every time he jumps in the final day of a major competition. However, while this wonderful trait got us a result on numerous occasions, he simply has become more and more careful in his old age across the country.

He had been having a ‘sweet’ time since the summer, jumping hedges at home prepping him for Pau 4 star, where last year he was the only horse clear inside the time and where he won the ‘Best Cross Country’ trophy. However he got an infected cut 5 days before leaving and has he missed some work I did not want to risk him!! He is now having a break with his best buddy – Franky – and will enjoy the hunting field over the winter.

Our other up and coming horses progressed at the autumn targets and have all achieved the relevant qualifications to move up to the next level for 2016, which is a nice result.

With a few nice young horses purchased in the last few weeks, our energy over the winter months will be put into these hopefully future stars! However a few other non-horse dates fill the diary for a few weeks, so it will be nice to have a bit of a break. We will also be hosting the popular winter arena cross country clinics, which I find are a great way to brush up on cross country riding techniques and teach the horses to understand the technical questions they will face next year when the new season begins.