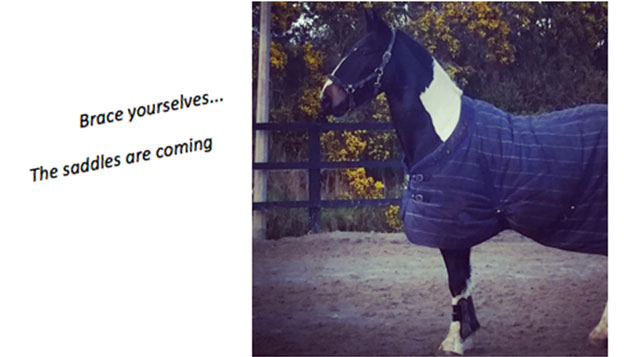 It’s been a sunny, lazy summer in the field for my good self. Between napping and maintaining a steady grass-to-mouth ratio, I have become well-padded, and somewhat complacent. Thus the woman has had quite a gentle run of it – although it’s only fair as she really doesn’t cope well in the heat – I’ve never seen such a small person sweat so disproportionately.

However, with the flies starting to, well, buzz off, and the nights drawing in, I’ve felt the ill winds of mischief start to nip at my gently thickening coat. Over-confident words about “winter leagues” and “moving up a grade” have drifted through the bars of my hay manger. Sadly, it is time to admit that the summer holidays are over, and I will have to return to full-time monitoring of the bucket shaker, aka “womanagement”.

Now that I am no longer a “young” horse, having attained the ripe age of 8, the woman has realised that simply blithering on about “my potential” is no longer going to suffice. These means either pack it in (preferable) or start acting on this supposed untapped talent (infinitely less preferable). Needless to say, we are both quite concerned by this – her due to her obvious lack of skill, and myself due to her obvious lack of skill. Action had to be taken; and fast.

As I pondered this in my stable, fully expanded rug straps pinching uncomfortably around my ample midriff, I had a sudden and miraculous brainwave. This has manifested in the woman discovering, to her absolute dismay, that my saddle no longer fits me.

The last time she had to engage in this activity it wreaked havoc on her delicate mental balance. The sheer magnitude of the importance of a well-fitting saddle, coupled with the number of zeroes at the end of the price culminated in a situation at the till where she had to be provided with a paper bag for the hyperventilation while they pried her VISA card from stiff, unyielding fingers. She also had no time for any actual riding, partly due to the lack of saddle but mostly because she was physically attached to the internet, being able to discuss at length the requisite merits of each and every saddle on the Irish second-hand market. Watching her attempting to justify house deposit prices for a brand-new one had me laughing so hard I blew all the water out of my drinker.

So while she is frantically scouring every website with the remnants of her brain spilling out of her ears, I’ve taken the time to compile a short list of how you too can implant this saddle-shaped seed of doubt. 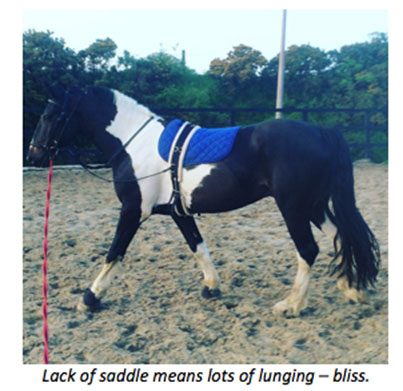 To put it quite simply, I just can’t turn right. Or left. Or go straight really, but that’s another matter altogether. I had to stifle a chuckle the first time she nonchalantly opened her inside rein to begin a circle and I ploughed straight on down the long side like a lumpy steam engine.

Due to my increasing size and the large fat deposits I have built up on either side of my withers as sustenance for the winter, the woman’s current baby-seat is a bit pinchy. Appropriate response is obviously to dial back all foreleg movement to the kind of dinky trot-shuffle any excitable 11h lead rein would be proud of.

While obviously allowing as little exercise as possible is of paramount importance to the success of this plan, sometimes we have to give a little to get a little. So – she opens the door carrying treats, we are motionless. She opens the door carrying saddle, rapidly reverse in a circle away from her until she either falls over one of the banks in dizziness, gives up, or comes a little too close to your bottom for comfort. Treats, motionless. Saddle, piebald roman candle. Simples.

Express your displeasure at the tightening of the girth while at the same time demonstrating your inner Michael Flatley (or Michael Fatley if you’ve been in the field as much as I have). Alternate between stretching your foreleg out in front in a Spanish Walk type manoeuvre, and then swinging it back to take a few pot-shots at the clammy fist undertaking the offending activity.

**Bonus Points** Due to the lush summer grass, my fluffy bed, and some fabulous new handmade Jimmy Choofs from my lovely farrier, my hooves have taken on a growth rate usually reserved only for genetically modified tomatoes and teenagers who have just been bought new school trousers. While not directly saddle related, this still deserves a mention as the exaggerated tripping I employ once the clinches rise (even by a millimetre) usually drastically reduces my workload.