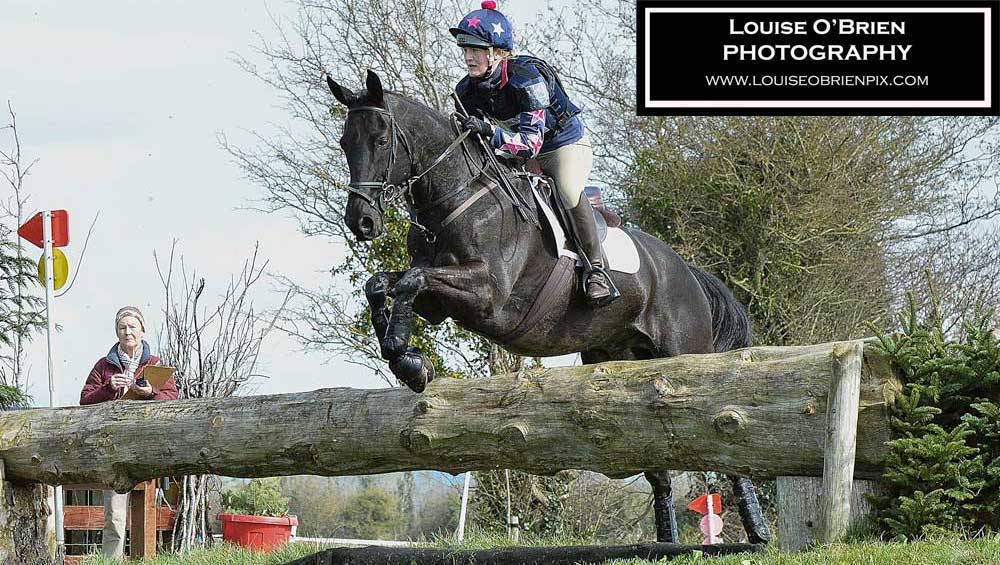 It’s 5.45am and as the alarm goes I can hear the wind howling and it’s pitch dark outside.  I am  fighting the urge to hit snooze, but Tyrella is in 2 weeks time and the pony needs to be exercised!

Welcome to the world of an amateur eventer!

So, despite the rather dreary picture I have just painted, I wouldn’t change it for the world because you see eventing is just a tad addictive. There is no better thrill than going cross-country and all the early morning and late nights are soon forgotten!

To start my HorsePlay blog series, I’d like to share a little about myself and how I ended up in the above scenario!

I am a true amateur eventer. I work full time for a global tech company (think of a famous search engine), I also manage the family farm and I have a number of horses (on last count 6), though only 2 are in work, the rest are field ornaments/youngstock.

I am lucky that I have grown up around horses and my mum in her younger days did a lot of producing of young horses for the jumping and show rings, so it was sure that I too would have an equine love affair.

Over the years, I had a number of ponies, some more suitable than others, but I learnt a lot from each of them. The one that really got me going places as a little 15h mare called Hati (Ringwood Hati) whom we bought from the Leonards as a just broken 5 yr old. When we went to see her she bucked her way out of the yard, but as soon as she trotted across the arena mum had her bought, despite only being broken 3 weeks and me about to go into my final A-level year at school!

My mum had a brilliant eye for a horse and over the years Hati became one the top working hunter ponies in Ireland, qualifying for the RIHS, winning Dublin and starting my love affair with eventing.

I returned from travelling and started work in Dublin in the property world, just as the property crash hit Ireland – talk about timing! I had a few in-between horses and Hati was put in foal to my mother’s words of “only a fool breeds for a wise man to buy”. Sadly, mum passed away in 2010 and my good friend Kay Nolan became my surrogate pony mother and the hunt was on to find me a suitable horse.

So in late 2011, within a week I had changed jobs and bought myself a new horse, in the form of DSL The Mooche (Mooche). I had known Mooche from the Meath pony club when he was ridden by Natalya Coyle and with her aiming for the Olympics as a pentathlete Mooche had been on livery with Sarah Ennis.

Mooche was the perfect horse – tall, dark, good looking and an absolute machine XC. This was then the start of my amateur eventing career, where there have been many highs and lows along the way and plenty of late nights and early mornings.

The 2012 season was about getting to know each other and in 2013 we stepped up to 1 star level (I plan to cover this quantum leap in a later article) and qualified for Camphire International. I will freely admit, I don’t love show jumping and at Camphire the show jumping was huge! Poor Kay went white when she saw it and so Sarah Ennis and her husband Niki stepped in and warmed me up!

I think I was too scared to say no as the warm up fence went up and up! But it worked, as Mooche and I jumped clear and then went on to go clear XC, completing our first international double clear and within the top 20.

We then headed to Ballindenisk that autumn and jumped around our first 3 day. I had 2 more fantastic seasons with Mooche, completing Tattersalls International twice, more top 20 placings in Camphire and Ballindenisk, a trip over to Somerford Park in the UK and in 2014 Mooche and I won the Eventing Ireland CNC* Amateur championship!

Early in 2015 Kay and I had made the decision that it was time for Mooche to step down a level at the end of the season. He had nothing more to achieve and although we would have jumped around a 2 star XC track the SJ would have us found out.

The hunt was on to find a replacement for Mooche to run alongside the homebred Dora (I intend to write another piece on producing home-breds!). Initially I had thought I would get something around 8-10yrs old that had maybe been there and got the t-shirt, but instead I found the most fantastic 6yr old mare called Heidi (Balief Clover) who had been brilliantly produced by Dale Adams in Wexford.

Last year (2016) Heidi and I stayed at EI100 level getting to know to each other as well as having a go at the workers in Dublin – she really is a true amateur horse as she can turn her hoof to anything.

We are now officially in the 2017 season, the ponies are clipped, the alarm has been set for 5.45am and Tyrella 1 is firmly in the calendar and it’s all guns blazing for the 2017 season!

The plans this year are to move Heidi up to 1 star and possibly aim for a CIC* at Kilguikey or Camphire or Millstreet. You see as an amateur your plans have to be somewhat flexible! So what if it doesn’t go to plan this weekend, there will always be another weekend and the day job thankfully pays the entry fees! The plans for Dora are to get her out eventing as well……maybe that alarm needs to be set for 4.45am!

Images with thanks to Louise O’Brien Pix