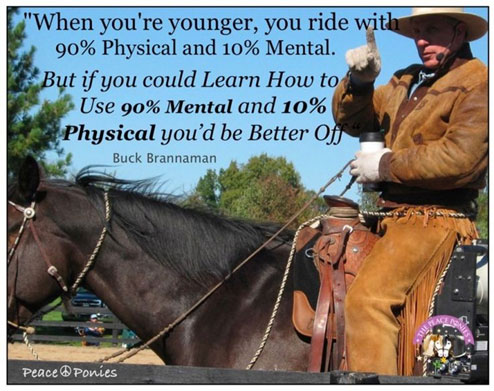 “The years teach much which the days never knew.” This is one of my favourite quotes and it reminds us to look back on where we have come from and what we have achieved.

Ten years ago I was an ambitious young person, very driven and with huge ambition. I was in a rush and nothing was going to stop me from reaching my goals. I am not proud to say that some horses undoubtedly suffered under my regime, that my arrogance and blind ambition did not allow for their needs enough and that I was a fool. I never did make that Olympic team, but these days I work from the other end of the scale with my horses and they blossom rather than cower. I have a keen interest in proper natural horsemanship-people like Buck Brannaman are rewriting the book on horse training – and my goal is to try and put the horse in a situation where the response he gives you first time every time is exactly what you wanted to begin with. Rewarding the slightest try, building confidence, THINKING. Doing a better job.

Recently I saw a rider who reminded me so much of my young and hungry self. This person was producing a young horse for a client, and by and large it was going ok. The thing that struck me was the pressure that the horse was being put under. He was being asked to cope with exercises that you would scarcely consider with an older horse and to do things that horses twice his age would struggle with. He tried very hard and he did very well, but did that make it ok? I’m not sure.

Age classes are a massive industry. They are where it’s at if you are properly competing and trading. Horses have a job to do and they are there in many cases to make money and pay the bills, but they are asked to cope with such a lot at such a young age to get started on that bandwagon. Quite a lot of top riders in show jumping and eventing don’t push their four year olds for the age classes, preferring a quieter four year old year taking their time to give the horses a broad education and time off to join the dots. The horses catch up easily as five year olds and in some cases flourish far more quickly for that little bit of extra time. Trevor Breen was quoted as saying that the best place for four year olds was usually in the field, and no one could doubt his methods of producing horses.

It’s worth thinking about. A regular overhaul of your training system is a good idea. A thorough character analysis of your horses can tell you an awful lot about how they best learn, and I can promise you that no two are the same. Instead of a ‘full steam ahead’ approach, try working backwards. If you ask your horse for something new, make sure that he understands the component parts first. Reward every single attempt at trying. If there are mistakes, ignore them. If he resists, check how and what you are asking him before you punish him for the wrong response. Be mature and responsible but be reasonable. Many millions of brilliant horses in every discipline have undoubtedly been destroyed in the very early training simply by giving them too much to do, breaking their hearts and disappointing them. They quickly stop trying. And there’s no road back from there. Time and respect are two valuable currencies, use them well and you will be rewarded.