Elizabeth powers to victory in the Amlin Plus Eventers’ Challenge 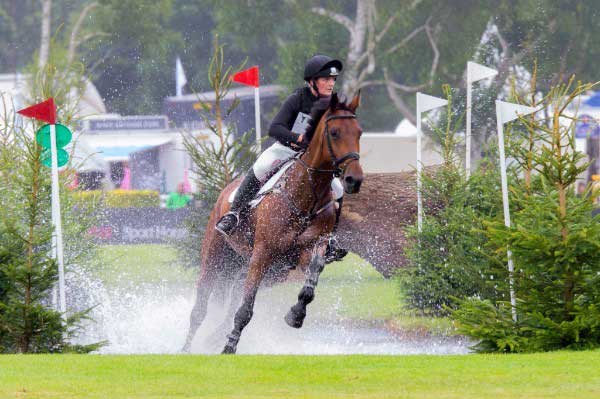 Ireland’s Elizabeth Power enjoyed a well-deserved win in the Amlin Plus Eventers’ Challenge today at the Longines Royal International Horse Show. Riding Doonaveeragh O One, Esib produced the fastest of only two clear rounds to take the £3,000 first prize.

Doonaveeragh O One, known as ‘Tommy’ at home, has a remarkable record here at the All England Jumping Course. He started life as an event horse, but after some time off, the decision was made to concentrate on showjumping to protect his limbs from the wear and tear of galloping across country.

With Esib’s brother Robert, Doonaveeragh O One came third in the Amlin Plus Eventing Grand Prix, the former incarnation of this popular class, back in 2012. They followed this by winning the Bunn Leisure Speed Derby in 2014, and had a crack at the Equestrian.com Derby 12 months later.

Last summer, Esib took back the ride for the first running of the Amlin Plus Eventers’ Challenge, where the pair finished runners-up to Andrew Nicholson. Last month, they produced a super round in the Equestrian.com Derby to finish 10th, before returning to the International Arena here at Hickstead to pick up their first Eventers’ Challenge winner’s sash.

“Anything any Power has ever done at Hickstead has been on this horse!” joked Esib afterwards. “He’s amazing – he hasn’t jumped a cross-country fence since he was here last year. He can jump big fences for fun and he’s the bravest horse I’ve ever sat on – I’d ride down to a house on him.”

In second was New Zealand’s Tim Price, who produced the fastest round of the day on The Precious One, but a pole down added 4sec to his time and cost him the win. Laura Collett (Mr Bass) was best of the Brits in third, ahead of Sir Mark Todd (NZB Campino) in fourth.

David Ashby, Managing Director of Amlin Plus, said: “It was a fantastic competition to watch and we were delighted to see a number of our clients’ horses go so well. Many congratulations to Elizabeth, who rode a foot-perfect round today. She has gone one better than last year and hopefully we will see her return again next year to defend her crown.”

In the first international class of the day, the Bunn Leisure Vase, Billy Twomey won on board Thomas. The pair also won the Ton Hudson Derby Trophy at Hickstead last month.

“He went well at the Derby meeting, and he’s improving all the time. He takes quite a hold in front of the fence, so with a big ring like this it gives me more time to organise him. But he’s always looking out for the next jump and he just seemed to be on it today,” said Billy.

In the Bunn Leisure Trophy, Italy’s Juan Carlos Garcia won with Gitano V Berkenbroeck. “It’s my second time here, it’s a fantastic show with great traditions and one of the few places you can come and compete on grass in a big arena,” he said.

The class will be televised live on Sky Sports and streamed live on FEI TV.

Tickets to the show are available at the gate or can be bought online at www.hickstead.co.uk.