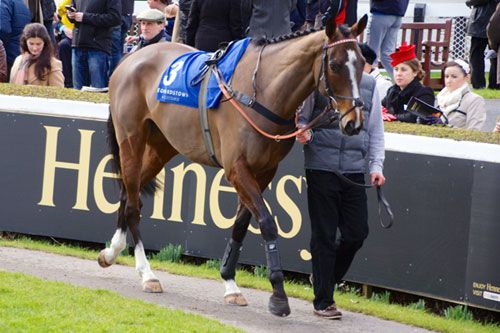 While the active horse racing season is not yet upon us, the Cheltenham Festival (March 10) will be here before we know it. While its main event from a greater racing perspective is often the opening day’s Champion Hurdle, the race that Cheltenham fans are keeping an eye on is the final day’s showcase event, the Gold Cup.

The always-thrilling Gold Cup is the crowning race of the four-day Cheltenham Festival, even if other competitions have equal or greater implications in the overall horse racing season. This is simply one of those events that’s typically special, because of the quality of the competition, the energy of the crowd, or both. And now, the 2015 field of competitors has been announced, so here’s an early look at the biggest names competing, along with their early odds to take home to the top spot.

The conversation starts with Silviniaco Conti, who’s the runaway favourite for this year’s Gold Cup. The horse finished in fourth in 2014 despite being among the favourites heading in, but it seems his form is being trusted by the betting experts yet again this time around. Betfair Betting shows Silvinaco Conti with 11/4 odds to start with, and Cheltenham analyst Keith Melrose notes that Conti is not scheduled to race before the Gold Cup. That means there’s really no reason for him to waiver in his status as the favourite between now and then.

Bobs Worth is another competitor to watch, as the former champion enters as a strange combination of underdog and near-favourite status. This year’s Gold Cup doesn’t have a clear second-best behind Silviniaco Conti, and with 16/1 opening odds, Bobs Worth doesn’t look like the strongest bet. However, it’s still worth mentioning that he was among the favourites last year after winning the race in 2013, While he doesn’t look to have the same form he once had, he shouldn’t be overworked heading into the race. He could always have a revival, particularly in a weaker field.

Technically the second favourite in the early betting odds at 17/2, Road To Riches is another hot name heading into Cheltenham. In late December, The Guardian argued that a win at the Leopardstown Lexus Chase could put Road To Riches on a favourable path toward Gold Cup contention. Sure enough, the horse managed to win the Lexus Chase the next day. That doesn’t guarantee a hot finish at Cheltenham, but when a champion is fulfilling expectations and in good health leading up to a major contest, he’s always worth taking seriously.

Finally, there’s Lord Windermere, who won the Gold Cup in 2014 and opened with 14/1 odds for this year’s race. Frankly, heading into 2014, he wasn’t on many people’s radar as a top contender. For that reason, it’s hard to think of him as a horse who can establish any sort of dynasty or back-to-back wins. But again, it’s not the strongest field we’ve seen at Cheltenham, and there’s no particular reason to doubt Lord Windermere’s form.

Overall, this seems like the sort of year in which either the favourite will take care of business as expected, or a winner may come out of nowhere. But in terms of the odds, recent performance, and past relevance, these are the four names to keep track of heading into March.