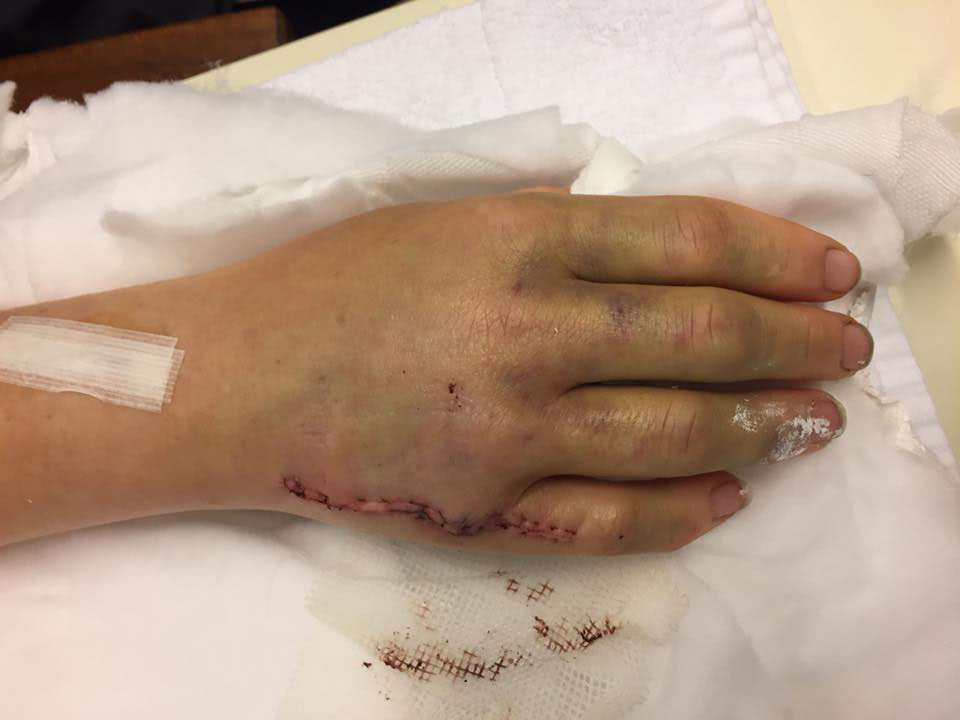 You may or may not have noticed, but we’ve been a little quieter than usual here at HorsePlay.ie… Unfortunately, I had a wee accident back in the middle of January. And yes, of course it was horse related!

It was one of those ‘yeah, I probably should have done that differently’ moments that I think we all have around horses every now and again. With two boys very happy to get out for the first time in a week due to a break in the weather having finally arrived, one decided to show his enthusiasm with a quick turn and a delighted buck and squeal and unfortunately I was just standing a bit too close.

The offending hind end headed fast for my head and while I managed to get a hand up and lean back, connection was made with my face and my poor, well-meaning hand. Not that I felt it at the time, but I know I was extraordinarily lucky.

IPhones may not be waterproof, but thankfully they seem to be pretty mud and blood proof and I managed to call my long-suffering (non-horsey) husband. It was a Sunday afternoon, so fortunately he was at home and able to help me in from the field, package me up in the car and deliver me to Beaumont Hospital.

3 ½ hours later (an impressive feat for a Sunday afternoon A&E visit) I was done and dusted, had been cleaned up and packed off with a confirmed broken nose, 18 stitches in my lip and a cast on to protect the broken bone in my hand (the right one, of course).

Being a typical horsey female, I spent the next week trying to do my usual work and horse routine, but not being particularly successful. Riding was definitely out, as was mucking out (henceforth delegated to my none too impressed husband/temporary official mucker outer, who no doubt is entertaining himself thinking of all the ways I’m going to owe him when I eventually get back to full duty).

Work has been similarly frustrating, my usual self-proclaimed efficiency replaced with slow, one left-handed typing as, being a digital marketer, computer work is 90% of my daily work routine.

I had to miss my annual pilgrimage to the BETA international trade at the NEC in Birmingham (in the other side of my business I specialise in marketing for equestrian companies through Halcyon Days). With the stitches and bruised and swollen nose, it was decided I was not in the most presentable state to represent either myself or my clients to the best of my ability (though I’m sure as BETA is THE equestrian industry trade event, people would have been more than understanding, given that it was an equine that resulted in my somewhat scary appearance). For HorsePlay, I have had my trusty sidekicks – Sahil in IT and Karen in admin –  to keep the orders going out and all your questions answered, so that has been a big relief.

While I had happily convinced myself that I would be back in the saddle within a few weeks (having managed to ride around Tattersalls CCI* three weeks after breaking a wrist a few years ago, the follow-up appointment with the orthopaedic specialist eight days after the incident spread some doubt on that.

Concerned noises over the x-ray with mentions of ‘multiple breaks’, ‘pieces moved’ and ‘right at the joint’ starting to ring alarm bells. The Orthopaedic specialist said there wasn’t much he could do bar leave it heal itself, but that he would refer the x-rays on to a hand specialist and that I would get a call later that day. So, off I toddled home to feel increasingly sorry for myself. 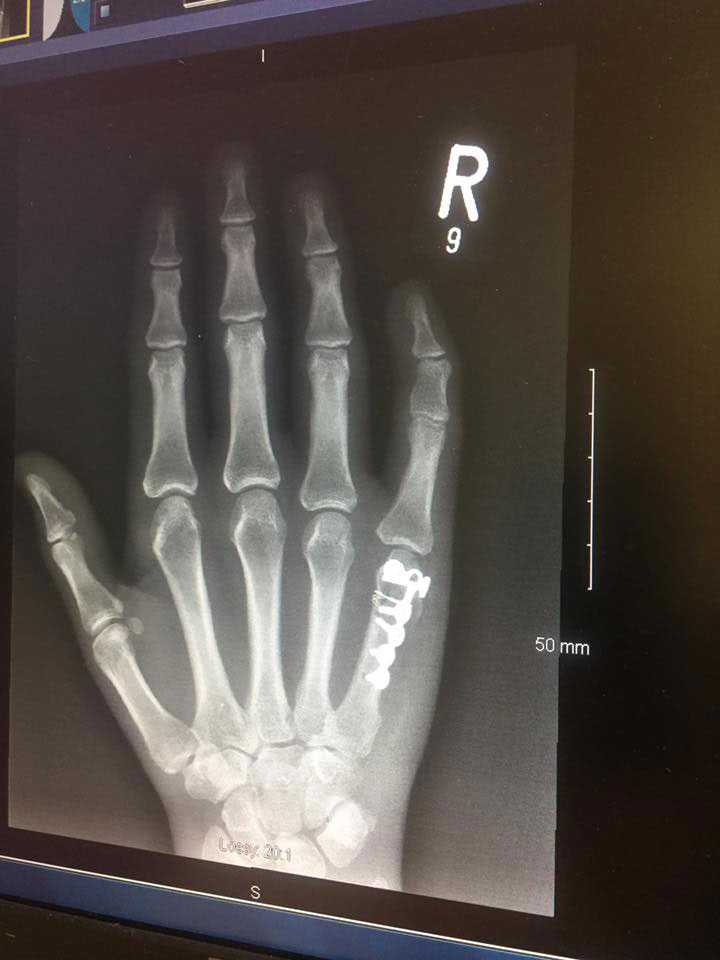 Another 24 hours later and I was out of surgery and being advised by my surgeon that I was very lucky, that he had managed to piece the bone back together (using a plate, five pins and a bone graft from my wrist), but that I had to be really, really careful not to do anything to potentially re-injure the hand before the bone had healed (he’s obviously come across a few stubborn horsey women before), and I was told that it would be 3 to 4 months before I could ride again. Not the sort of news you want to hear in January with plans to do the 120 Spring Tour league with ambitions to man up enough for 130’s this season. Not to mention the fact that I’ve managed to accumulate a few too many youngsters over the last couple of years, all of which need to start to be grown-ups.

But, such is life.

As we all know, accidents can happen all too easily around horses. I was complacent on the day and I paid the price. But it could have been so much worse. I could have lost my teeth, my jaw could have been smashed or, worse still, my head. But ‘all’ I have to endure is some pain, a few scars, intense physio and a few months without riding. And I know for sure I will be more careful in the future. And I think a riding hat will now be regular wear for me for turning out horses, even though one would not have helped me this time…one really can never be too careful.

On the plus side, if you’re going to get injured, get injured in January!

With all horses bar one either chucked out or farmed out (cue grateful wave to everyone that has helped me manage all this), storm Doris and storm Ewan have impacted me little more than being vaguely annoying when I cross the garden to the yard twice a day to perform the only two tasks I can carry out one-handed – feed the one remaining horse and hang up the occasional hay net (I can’t even fill the damn things!).

There is no struggling with stressful schooling sessions with horses driven demented by the wind demons, no chilblains, no wind blasted cheeks nor rain sodden jackets. And another plus side is that my nails have never been so clean!

Although this weather could just as easily happen in summer in Ireland, I’m glad to be missing it. And as I have a forced horsey holiday, I’ve decided to put the time to good use.

As an amateur rider, one area I struggle with is my confidence. I have a couple of lovely horses and one who is well capable of 130 and beyond, even though the thought of me riding those tracks makes me slightly nauseous!  I have decided to put the downtime to work and am working through some sport psychology programs to help me.

So, watch this space, as I am hoping to share my journey! Though, if you don’t hear from me again on this topic it probably means that I failed miserably… Which, of course, is just the kind of negative self-talk that I am determined to put an end to. J

Last week’s check-up went very well, with the surgeon making very positive noises. I have been diligent verging on obsessive regarding my hand physio (which has been every two hours from two days post surgery!). As a result, I’m hoping to be back in the saddle by the end of March, just in time for the clocks to have changed, Spring to have arrived and all the bad weather and hopefully bad luck to be behind me. I’m nothing if not optimistic.