A 19 year old grey mare was presented to me with a history of on-going laminitis. She had been treated previously by a vet for a respiratory infection with steroids and had developed laminitis shortly after.

On presentation the mare was very lame, reluctant to move and stood in the classic “saw horse” stance (taking as much weight as possible on her hind limbs). The owner said that the mare needed bute to have any level of comfort and had gone off her food. The mare had all the classic signs of severe laminitis.

On examination the mare had poor quality hooves and a prolapsed sole. There was an area of solar necrosis (dead tissue) where the pedal bone was pushing through the sole. The mare was sedated and radiographs of the feet were taken. On radiographs it was apparent that the pedal bone had rotated and was pulled away from the lamina of the dorsal hoof wall. There was also evidence of separation of the hoof capsule from the pedal bone near the toe. The left foot showed more severe changes than the right. I advised that a venogram should be performed to assess the vascular integrity of each foot.

The mare came into our clinic for the venogram procedure. She was sedated and local anaesthetic was used to numb the feet. Radiopaque dye (that can be seen on X-ray) was injected into the veins of the feet and radiographs of both feet were then taken. The venous supply to the left foot was compromised but the right foot was fully vascularised.

Venograms are a good prognostic indicators because if the blood supply has been severely damaged the prognosis for recovery is grave. Therefore, in this case the left foot was a worry and worsened the prognosis.

After discussions with the owner we decided to go ahead with remedial shoeing and to radiograph the mare regularly to ensure that the left foot didn’t deteriorate further. 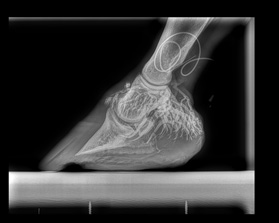 Using the radiographs we were able to take measurements of the pedal bone with respect to the hoof capsule. This allowed us to devise a plan in conjunction with the farrier to forge a remedial shoe to attempt to de-rotate the pedal bone. To do this the heels were paired down, the toe was shortened and an open toe, wide heart bar shoe was applied with a 12mm heel raise. The sole was packed for support and the packing was kept in with a mesh. 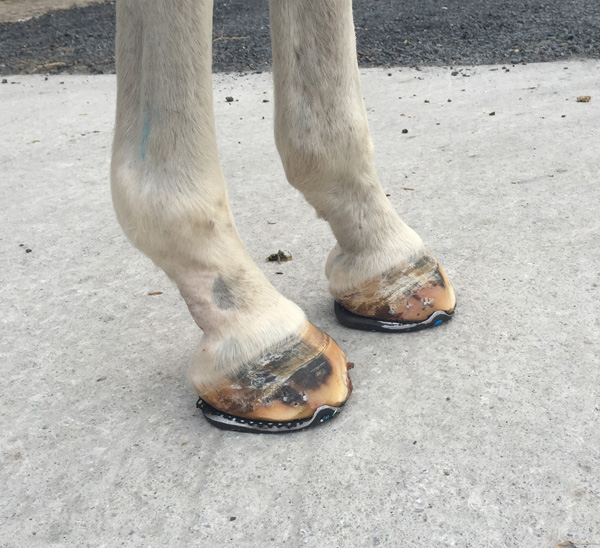 The mare had instant relief with these shoes and could walk more comfortably. She was maintained on Phenylbutazone (1gram) once daily for the first week with the dose tapering down every week.

Now 4 weeks later, the mare is very comfortable and is off Phenylbutazone completely. She will come back into us in 2 weeks time for another shoeing during which, with the aid of radiographs, she will be shod to encourage further de-rotation of the pedal bone.

Thankfully the mare is doing very well and we are delighted with her progress. However, laminitis is a very serious condition and has cost the lives of many horses. Next time we will discuss the proposed causative factors of the disease. So here are a few questions to get you thinking.

What is laminitis? What are the structures affected and how does it present?

Name a common cause of laminitis?