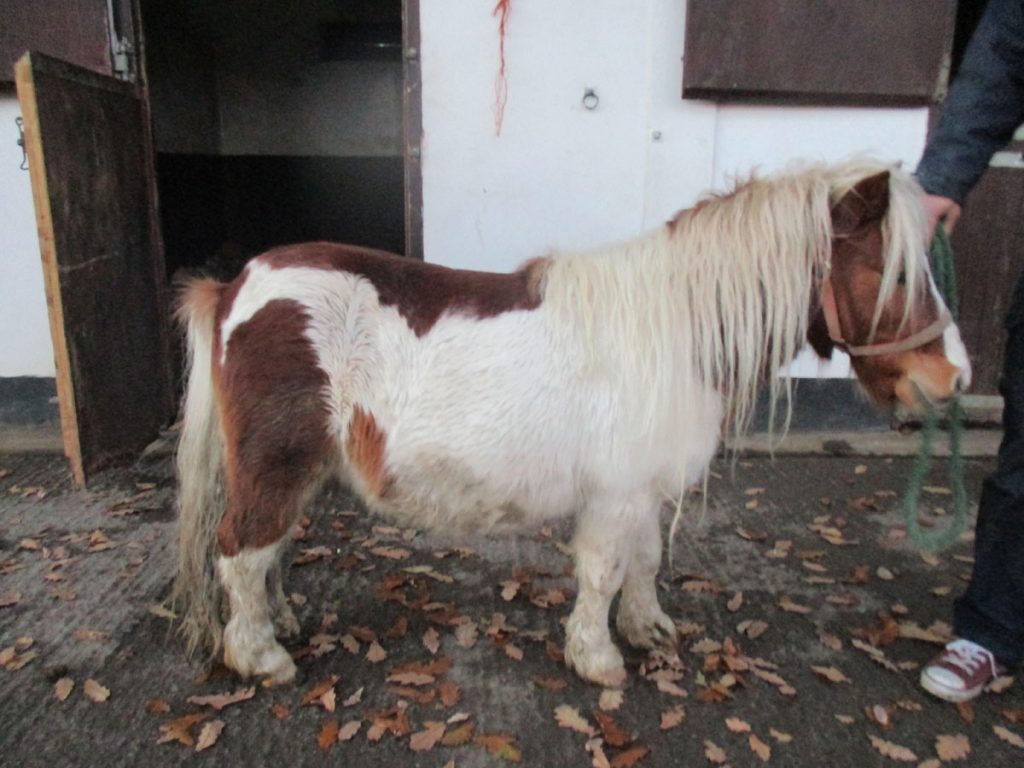 At Portlaoise District Court on Friday 16th February 2018, James Ryan of 54 St. Brigid’s Place, Portlaoise admitted failing to safeguard the welfare of an animal contrary to section 11 of the Animal Health and Welfare Act and two counts of obstructing an Authorised Officer.

ISPCA Inspector Mary Claire Casement described to the court how she called to St. Brigid’s Place, Portlaoise on Thursday 10th November 2016 in response to a report of a pony being kept in a small garden. On investigation she found a small brown and white Shetland stallion pony confined in a dark shed with no natural light.  The floor of the shed was covered in debris and the shed also housed a home heating burner and a container for storing home heating oil.  There was no water or suitable food available to the pony.

Inspector Casement made the decision to seize the pony and organised transport and Garda assistance but when she and the Gardaí returned to the shed the pony had been moved. It was located in the front garden of Mr Ryan’s home at no. 54 St. Brigid’s Place. Mr Ryan confirmed ownership of the pony claiming he had purchased it for his two month old daughter.

When Inspector Casement told Mr Ryan of her intention to seize the animal he became obstructive and verbally abusive. He also attempted to physically obstruct the removal of the pony.

In court the defendant’s solicitor made a public apology to Inspector Casement on behalf of her client for his behaviour on the day of the seizure. Judge Catherine Staines granted an application by the prosecution for forfeiture of the pony, now named Bumper, into the care of the ISPCA and adjourned the case pending a restorative justice report.

“The conditions in which Bumper was being kept were wholly unsuitable for an animal of this species” commented Inspector Casement, “He has been in the care of the ISPCA for the past 15 months so we are delighted that he has been forfeited to us as we can now find him a permanent loving home. Bumper has not been gelded yet but, despite being a stallion he is a complete pet and is loved by everyone who meets him for his gentle and charming personality”.

Members of the public should continue to report animal welfare concerns to the ISPCA by contacting the National Animal Cruelty Helpline on 1890 515 515 or report cruelty online in confidence on www.ispca.ie/cruelty_complaint