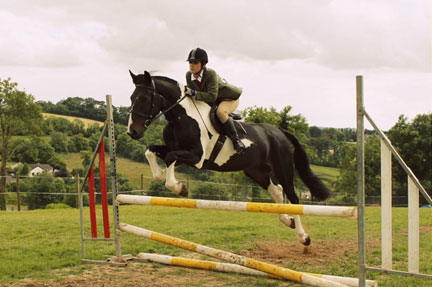 I have learned over time that the human is a simple creature, easy to anger and easy to please. They are largely predictable and can become habitual in their demeanour. For the enterprising equine, this can cause daily life to become somewhat humdrum and lead to them feeling taken for granted.

Aside the deluge of horse/human selfies (think gormless smile on her part, ears pinned on mine) I’ve taken some inspiration from the woman’s smartphone – the software update. And while there may be no updating the “software” around her middle that jiggles in sitting trot, I’ve come up with a few methods of updating her mental faculties:

1. Trick or Treat
The woman took a spin with the concept of post-ride stretches; she’d put my rug on, and then bribe me to do the Hokey Pokey with my head in receipt of a meagre Polo mint. I put up with this attempt at “Downward Facing Horse” for a fortnight before realising the error of my ways. Now, every move she makes in terms of putting on my rug is greeted by my flapping lips close to her hand and the odd “unintentional” headbutt for good measure. Of course, she blames herself entirely for teaching me this and is trying to reverse it by doling out treats without any requests. I’m also now so limber that I can get out of my stable rug without opening any of the straps.

2. Lord of the Flies
I know full well that the woman is not organised enough to have purchased fly spray in advance of the influx of the little buggers. As such, I start with a small quiver of the wither; a shake of the rump; advancing to increasingly aggravating tail-swishing, a spate of head-bobbing, culminating in a rumbling full-body shake which, if caught unawares, will hopefully just roll her right off the side into the dust.

3. Legs-Eleven
Sunny afternoons, lazing droopy-lipped in the sunshine; the average biped will understand that a cocked back leg is just the sign of a relaxed equine. Periodically shift your weight from foot to foot; preferably over a five-to-ten-minute timeframe. Up the ante and move to 3-5 minute intervals when the requisite human comes to fervently stare at your limbs, chewing their lower lip. Trot up sound. Rinse and Repeat, safe in the knowledge you are likely only doing “light work” for the next few days.

4. Tokyo Drift
I’ve always thought of myself as an artistic soul; I mean living your life as the equine equivalent of a Rorschach test has to have some sort of impact on one’s general world view. Therefore, this summer, I have abandoned the concept of the “straight line” as an almost Fascist construct. To illustrate – approach to a fence? Glide smoothly off the pre-prepared flight plan and arrive at the fence so that your human’s foot is guaranteed to connect sharply with the wing. Either side will do. Developing an insistent slalom into the middle of the arena from the track is also guaranteed to cause consternation.

5. Weight Watchers
We are all well accustomed to the age-old “puff out” method of holding one’s breath when that loathsome girth is being done up. However, I feel that this is a short-term solution to an ongoing problem. Now, instead, I ensure to suck in my belly as much as possible, preferably to the extent that there are no more holes available with which to close the girth. By contrast to the “inflatable pony” method, great concern ensues over this sudden and dramatic weight loss. Results noted have included diminished riding and increased feeding.