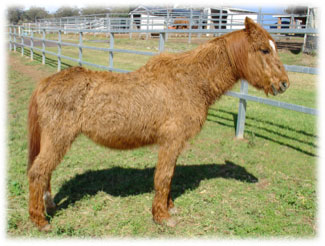 Last week BEVA announced that their prestigious 2018 Sam Hignett award has been given for research into a novel treatment for equine Cushing’s disease, also known as Pituitary Pars Intermedia Dysfunction.

The award, made for the best clinical research presentation from equine practice, was presented to David Rendle, for his paper Efficacy of a novel palatable pergolide paste formulation for the treatment of pituitary pars intermedia dysfunction (PPID) in ponies. David is a specialist in equine medicine at Rainbow Equine Hospital, North Yorkshire.

PPID is the most common endocrine disease in horses and the treatment for it, pergolide, is one of the biggest selling equine drugs. Mr Rendle’s research investigated a new unlicensed formulation of pergolide as a palatable paste, which was developed for use in horses that do not tolerate, or do not respond to, treatment with the licensed drug.

The paper outlined the difficulties of administering tablets to horses, particularly when the dose is only a fraction of a tablet and also explained that horses might respond better to treatment if smaller amounts of pergolide were administered twice daily rather than once daily. The new pergolide formulation overcomes these issues by allowing accurate administration of very small volume of molasses flavoured paste produced specifically for horses.

This important work is the first to demonstrate that the new paste formulation was effective and was not associated with any side-effects. The concentration of the pituitary hormone, ACTH, came down following administration of the paste and the clinical signs of the treated horses improved.

David Rendle said: “Although pergolide paste is available in the UK through veterinary surgeons it is not a licensed medicine and needs to go through a proper registration process in order to become licensed. This will involve larger and more robust investigations of safety and efficacy to build on this initial pilot study