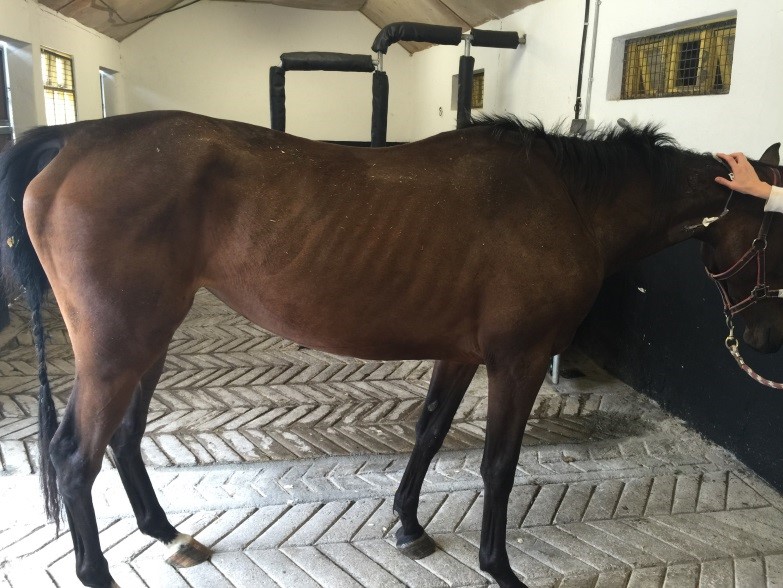 A 3-year-old thoroughbred presented to clinic with a history of progressive weight loss over a short period of time despite a big increase in feed. She had been in preparation for the sales and within a couple of weeks her health started to deteriorate. The filly started to show intermittent episodes of mild colic and a decreased appetite.

On examination the filly was a 1 body condition score (National Equine Welfare Council BCS 0-5 scale), her coat was poor and she had a dull demeanour. The clinical exam was normal except for increased gut motility in all 4 quadrants.

On ultrasound examination of the abdomen the small intestine had thickened walls, particularly in the duodenum (uppermost part of the intestines). I took a blood sample for full profile analysis including testing for, infection and assessment of organ function. The results included low protein associated with low albumin (a specific blood protein). Our presumptive diagnosis was Inflammatory Bowel Disease (IBD). 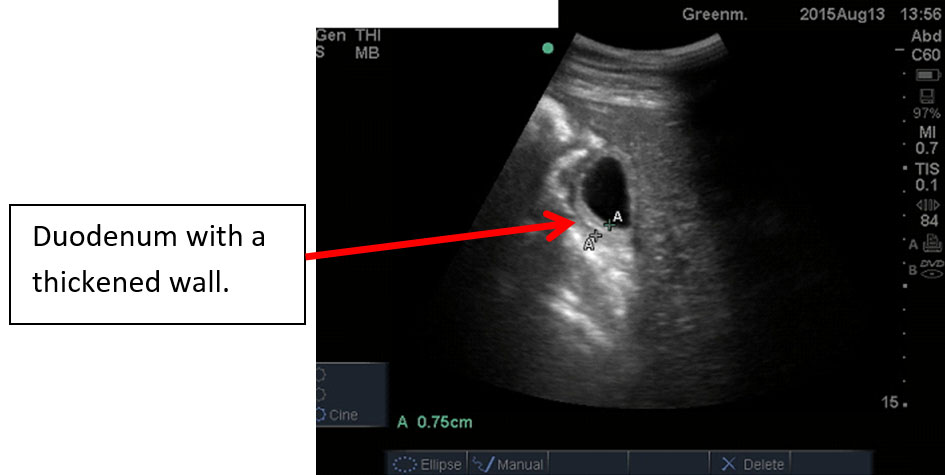 Inflammatory bowel disease is a malabosrptive and maladigestive disease that most commonly affects the small intestine, but can progress to large intestine in very advanced cases. Characterised by the infiltration of mucosa and submucosa with abnormal inflammatory cells, it is usually triggered by infectious, parasitic or dietary antigens that results in abnormal immune response.

Similar to this filly, horses present with a history of dramatic unexplained weight loss commonly associated with a change of environment or diet. It is associated most commonly with younger horses and particularly Standardbreds.

Due to the loss of function of their intestines to absorb nutrients, the horses cannot maintain their nutritional requirements and often have low blood proteins. Also because the food is not digested normally in the small intestine, it leads to carbohydrate overload of the large colon. Fermentation of these carbohydrates result in gas production which presents as intermittent episodes of gas or spasmodic colic which was seen in this filly.

The filly was admitted to the clinic for further diagnostics. The most important aspect of IBD investigation is to rule out all other possibilities as it is such a rare disease. So we began the process of the confirming our presumptive diagnosis.

The most common test performed for diagnosis of IBD is a glucose absorption test. This is a simple test based on the basic principle of absorption of substances across the gut wall and is a great way of assessing the function of the small intestine (See box 2 below).  This filly had an increase of 95% which indicated complete malabsorption of the intestinal wall.

An abdominocentesis (taking a sample of fluid from the abdomen) was performed to exam the cells of that fluid. The lab analysis confirmed an increase in inflammatory cells but no evidence of neoplastic cells.

To ensure there were no complicating factors associated with the stomach, a gastroscope was performed to check for ulceration and gastric neoplasia. The lining of the stomach was hyperkeratinised (thickened) and there were some areas of erosion. Although these finding were not considered significant, ulcer treatment was still included in the treatment plan as a preventive measure.

Having ruled out the differentials of weight loss and taking into consideration the results of the blood glucose test, the filly was diagnosed with IBD and a treatment plan made.

Treatment for IBD in horses

The mainstay of inflammatory bowel disease treatment is immunosuppression achieved with corticosteroids. Other vital components include removal of any stimulating factors that could arise from the diet, from bacterial or viral infections or from parasites.

The filly was started on high dose injectable steroids and fed a highly digestible diet in small amounts and frequently. She was wormed with a 5 day course of febendazole followed by a wormer containing moxidectin. She was also started on a course of antibiotics (Doxycycline). Omeprazole was given daily as preventive measure due the use of high dose steroids and the risk associated with ulceration.

The filly responded favourably, her appetite improved and she began to put on condition. After 3 weeks the filly was sent home with a continued tapering dose of oral steroids. It was explained to the owner that although she was doing well that she could relapse and that her prognosis was poor to guarded.

Over the next 2 weeks the filly continued to do well but then unfortunately succumbed to a bout of colic which was resolved with pain relief and the steroid treatment was increased again.

Even though her initial response was to improve again, within the week she had developed skin lesions which is a very poor prognostic indicator and had an acute episode of severe colic. The owner and I discussed the situation and with such a grave prognosis the owner felt it was unfair to continue her level of suffering and unfortunately the filly was euthanised.

This was a very unusual case and Inflammatory Bowel Disorder is considered a rare disease in horses. However, weight loss is a common cause of worry for owners. If you are worried about your horse’s condition, ask a vet to do a clinical exam and body condition score (BCS). I must admit I have found in some instances that owners misinterpret the BCS score of their horse, leading to under or over nutrition of the animal. Therefore, it is crucial to either have veterinary guidance or to use a body condition score chart when examining your horse.