A Bit of Something New

In conjunction with her lifetime goal of becoming the Anky von Gobshite of Irish Dressage, the woman has intensified her already over-zealous obsession with the types of machinery she inserts in my sensitive mouth. Of course, she’s not to know that it’s all completely irrelevant since I am possessed of a particularly agile tongue and am capable of negating any form of mouthpiece and noseband combination she happens to spring forth, but when the hay runs out sometimes I turn an ear to the fevered wafflings she forces on any poor unfortunate who catches her eye on the passageway.

According the latest internet research fuelled ravings, she’s gone all continental on me, and purchased a “hanging cheek French link baucher” (see above). As far as I was aware, Baucher was a Mario Kart character and the only item of French origin I’m interested in is the touch of garlic in my coarse mix, but bless her she’s as excited as a Shetland in an unattended feed room.

Fast forward 40 minutes of frustrated riding later, and I’ve managed to neatly place a raincloud over her downcast head. Spurred on by her recent “successes”, she had clearly convinced herself that this new bit was the final piece in the puzzle to transform me into a paint-splattered Totilas.

Now – don’t misunderstand me – I have no particular issue with this, or any other bit. But it is important for their development that the human should hit an unexplainable brick wall at least three to four times a week. (Any more than that and they are liable to give up altogether and you risk becoming a school horse, any less and they may feel you are ready to go out and compete.) I eased her in during the tacking up process. Once metal touched tongue, I launched into Phase One: Distress Phase– an onslaught of expressive, wet sneezes, showering her with mucus. I combined with manically flinging my tongue under and over the mouthpiece until she jammed it shut with the noseband.

Closing the noseband prompted Phase Two: Spasm Phase. I abruptly stop sneezing, cock my head to one side letting one ear flop uncontrollably, un-focus my eyes and stick out my tongue. Hold this position for 3 to 5 seconds, then intersperse with a round of sneezing and then back to mindless drooling.

Once mounted, she was introduced to Phase Three: Issues. This involves similar moves to general flatwork schooling, but with a few extras designed to cause concern over whether the right decisions may have been made regarding mouth hardware. I adopted the approach of maintaining a rigid neck position at all times, alternating between a few laps with my mouth open as wide as possible and bouts of intense sneezes and manic headshaking.

It is vital to overreact to every aid. Downward transitions should be so abrupt as to jolt the rider onto the neck, coupled with throwing the head up sharply so as to smack them in the face as they fall forward. Halt should be similarly jarring, and accompanied with a few fretful backwards steps and head tossing. Ignore any attempts to steer, drifting into the walls and the path of any other riders and if possible turning in the opposite direction to the one indicated.

The woman was thoroughly agitated by the above behaviour, worrying that she had set back my schooling months (as if she actually has any impact on that) and generally blaming herself in numerous ways. Goal achieved.

However, despite my obvious genius I am not infallible. As I congratulated myself over the Polos she had given me to assuage her guilt, I heard her worried voice pierce the bliss of knowing a few days off would follow;

“I’ll have to get him the dentist.” 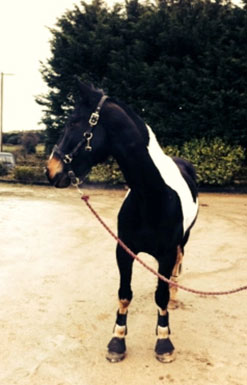