And now, a word from Black Beauty 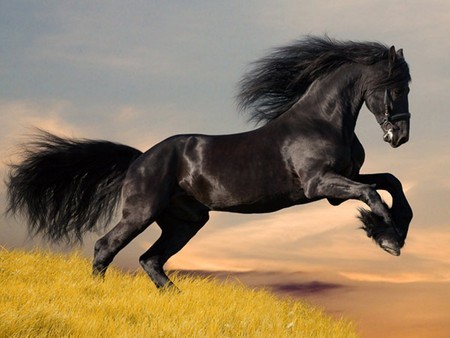 Through the years, much has been written about us horses. While the young ones of today might have grown up with the likes of My Little Pony, I at least hope that some of you remember us from the classic era that even brought about this horse craze. I’m talking about the 1877 novel written by the human Anna Sewell, but the biography was by me, Black Beauty. If you think it’s a cute little story about horses galloping through green meadows, you’re terribly misinformed. Besides possibly being one of the most important pieces of literature ever penned about animals, it tells us a lot about the strange, unique, and often times funny relationship and similarities between humans and us horses. Not to toot my own horn, but it’s a pretty inspiring tale. I mean, we didn’t sell 50 million copies in 50 languages for nothing.

We’ve also been brought to the screen four times and counting, according to an article on Empire. With a more contemporary remake underway, it shows that my story remains as relevant as it was in 1877. Even The Gamomat game Black Beauty on TuxSlots shows how the story continues to be updated for modern audiences. While it isn’t exactly a narrative about animal rights, it does reveal another side of us that doesn’t just suggest we are pets.

Not to spoil anything if you don’t already know my story, but I just about went through hell and high water to arrive at my well-deserved retirement vacation. And now that I’m actually here and have time to ponder life without anyone pulling at my reigns, there are a few lessons I’ve picked up along the way.

When I started out, I was a carefree colt on a farm. I was raised by the caring Farmer Lou and my mother, Duchess, who always told me about the importance of being kind. I never bit anyone, kicked, or threw a fit — pretty much the horse embodiment of an English gentleman. What does this tell us about the rabid animals (and people) we encounter? Well, they weren’t just born ill-mannered. It’s more to do with the environment they were raised in. Some of us maintain that spark of hope as we grow older, but others build walls to stay safe from the harshness of the world.

Now, I like to think that I tried my best to be the former, no matter where life took me. After my life at the farm was unexpectedly cut short, I found myself pulling cabs in London. As a naive young horse, I thought everyone was a Farmer Lou — warm, good-natured, and gentle. But I couldn’t be more mistaken. Life as a horse is hard enough. But life as a horse in Victorian England carrying overweight rich men? Really, really hard. There were challenges that waited for me at every corner, along with little kids looking to pull my tail. It was unpleasant, but it makes you realise how much civilisation owes so much to us horses.

Though humans have these so-called “cars” now, pretty much everything that had to be moved back in the day was moved by a horse. We performed every function in society, but all we got were consolation carrots. So no, we’re much more than just pets. I would argue that some horses are even smarter than their humans, like these race horse owners naming their horses “Best Solution” and “The Worlds End” to go viral on the internet. It’s laughable, but I wouldn’t deny how it’s certainly more distinct than “Black Beauty” — even though I am quite proud of my name.

If there’s one life lesson I look back on fondly, though, it’s that there’s always something to look forward to even during your darkest times. Early on, I accepted that my life was already on autopilot. Going from owner to owner, I was subjected to work without complaint. But with compassion and friendship, it’s a journey worth seeing through. Of course, that retirement plan is a harmless motivator, too. Take it straight from the horse’s mouth (pun intended).