Alice Dunsdon is a happy girl. Fresh from her incredible trip to the Adelaide International 4* with her horse Fernhill Present (aka Hilly), she is on the brink of making history.

Thirty-year-old Alice, from Guildford in Surrey, runs a small but select string of event horses and is a joint master of the Surrey Union Hunt. Her time on the hunting field is no doubt responsible for her effective and stylish way of riding cross country.

Hilly was found in Ireland as a five year old at the all-conquering Fernhill stable, one of the world’s leading producers of event horses. Alice bought Hilly because she liked him as a type and she loved him as a jumper. Jumping is no doubt Hilly’s forte as he has shown many times, sauntering around the toughest tracks in the world with consummate ease.

In October 2011, Alice and Hilly contested their first 4* at Pau, France. Hilly was only nine years old and Alice did a masterful job, carefully protecting and educating him. A clear cross country round and just one showjump down was a brilliant start to Hilly’s 4* career.

“They say you know if you have a true 4* horse at their second 4*, as that’s when they’ll say ‘no’ if it’s too much for them” said Alice.

Hilly’s next stop was Burghley in 2012. Burghley is said to be the biggest 4* in the world, with no soft jumping options anywhere on course.

Another brilliant clear cross country round and just one pole down in the showjumping definitively proved that Hilly was 4* material.

Hilly’s next stop on the 4* trail was Luhmühlen in 2013. The cross country course was truly massive and claimed the scalps of several of the world’s best. Hilly dug deep again and recorded yet another clear cross country round, cementing his reputation as an exceptional horse capable of making it count when it mattered.

I asked Alice what it is about Hilly that makes him such a genuine and consistent campaigner at the top level.

“He’s tough. He’s just so tough. He can cope with whatever you throw at him. He has always been a brilliant traveller and he can handle anything.” 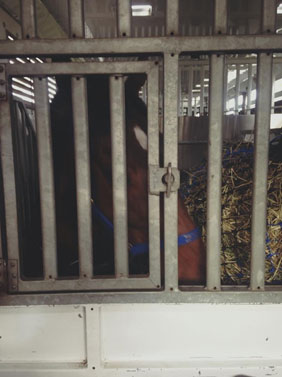 In 2014, Hilly and Alice made the long trip to Kentucky to compete at the Rolex 4*. A rare glance off on the cross country course provided the only blip on Hilly’s 4* record but he went on to complete with just one pole down in the showjumping. Hilly had now completed four of the six 4* events that run worldwide, leaving only Badminton and Adelaide uncontested.

To some, it might have seemed a crazy gamble flying a horse to Australia, but fortune most definitely favours the brave. Alice and Hilly set sail to Adelaide in September 2015. Weeks of quarantine in the UK gave way to a 37 hour journey by air, with stops at Amsterdam, Sharjah UAE and Singapore before touchdown in Sydney and a long road trip to the quarantine facility.

Quarantine in Australia was rather more challenging than in the UK, as Alice was not permitted to ride Hilly. He could be turned out or lunged, but it was a worrying time with a horse at peak 4* fitness. Luckily, Hilly’s very level mind and Alice’s careful management meant that quarantine passed without incident and they made their way to the Magic Millions racecourse.

‘Hilly definitely wasn’t himself during quarantine in Australia. I think he was a little confused. Once we moved to Magic Millions and I was able to ride him again, he seemed to say ‘oh ok, this is more normal’, Said Alice. This was anything but standard preparation for a 4* and I asked Alice how they coped not being able to train and compete as they normally would in the run up to a three-day event.

“I thought about trying to get him away to cross country school in Australia but it would have been a massive palaver. Hilly was in quarantined isolation and was not permitted to be within ten meters of any other horse. All transport and facilities used by Hilly had to be examined by the quarantine department of the Australian government to ensure that they were sterile and within government regulation. I think the temptation to go and do these things is more for the rider and not for the horse. At Magic Millions, Gillian Rolton (former Australian Olympic eventer) made sure I had a couple of showjumps and a skinny. These horses know their job.” 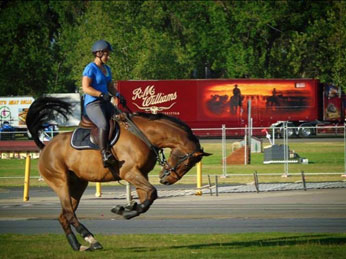 In the days immediately before the competition began, Alice’s much loved Doberman Bertie became ill and died, and her sister in law Natasha Eddery lost her father – the legendary flat Jockey Pat.

Things looked brighter when a brilliant dressage test from Hilly got things off to a good start, but as cross country day dawned, Alice found herself in hospital with what appeared to be severe food poisoning. Suddenly, things looked in doubt. They say a horse is only as good as his rider and if Hilly is tough then Alice is yet tougher.

Despite everything, Alice set sail across country and recorded a fantastic clear. Afterwards, she credited Hilly with looking after her – no doubt repaying her for the many times she has taken care of him. It is obvious to everyone following this wonderful combination that they have a unique and special partnership.

“I think it’s really important to reward a horse when they do a good job for you” said Alice, “we have a very special bond, especially across country and I am so grateful and thankful for everything he has done for me”.

So what’s next? Hilly is currently enjoying a month’s holidays before being prepared for leg number six of six – the formidable Badminton Horse Trials. If Alice goes on to complete, herself and Hilly will make history as the only horse and rider combination to contest and complete all six of the world’s 4* competitions. Exciting times ahead and Hilly fever will be at its peak next May at Badminton.