Self esteem… it’s not just a human condition. Our horses possess it too and it can work for you or against you.

Self esteem… it’s not just a human condition. Our horses possess it too and it can work for you or against you.

Low self esteem is a common affliction of the human condition. Sadly, a great many people feel that they are not worthy or somehow not quite good enough, and they can end up enduring a rather passive existence. The same is also true of horses. Whilst man and horse have many vastly different requirements in living, they do share a few key values-to understand where they fit into a group dynamic, to belong, to have company and to have access to the basic essentials required to survive.

It is my opinion that horses think and feel far more deeply than mere humans give them credit for. We have all seen examples of horses developing a deep bond with a human, a horse or another animal. Many of us have also witnessed jealousy, anger and sadness in horses. These are all somewhat more complex emotions than you might expect to find in a herd animal that is ultimately designed to stay alive and run fast.

Over the years, I have dealt with many a horse using traditional methods. I have mostly needed to get that horse to do his job in the shortest time possible, for the least amount of money. The ambition of youth in the early days, combined with the need to generate money in order to survive was in honesty, to the detriment of a fair number of horses that I had through my hands. As I have gotten older, I have developed an interest in natural horsemanship, as portrayed by iconic figures such as Buck Brannaman and Mark Rashid. 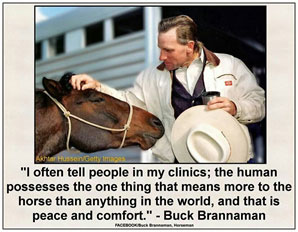 I haven’t stepped too far away from my eventing roots at all, I have just developed a slightly different approach and mindset. Whilst I am in no danger of winning an Olympic medal, I do find having a good relationship with my horses and having them both understand and deliver for me, to be a very rewarding experience every day. This is particularly important to me these days, since I only ever ride mares. It sounds obvious to say that the aim of the game is to put the horse in a position whereby his responses to the questions that you ask are exactly what you want them to be. It may sound similar to the more standard methodology, but it is not the same. All in all though, I’m not even sure that your training approach matters too much, as long as it is kind and the horse can develop with confidence and understanding.

When I was sixteen years old,I played polo in the uk. A series of unfortunate events left me horseless, and the race was on to find a suitable replacement. We found a very tall, very thin and particularly angry chestnut horse who wasn’t keen on being ridden or cooperating in any way. I was an ignorant youth who was about to learn a few valuable lessons. We never were able to find out what happened to this horse. Quite apart from his horrific scars, he also had a partially severed lower tongue which went some way to explaining why he regularly bolted. The horse was bullied horribly by even the smallest of ponies in a herd, and he hated the world. 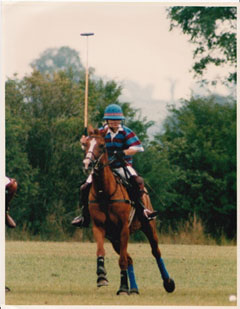 Over time, I got him going in a hackamore. I played polo on him for one season, but I had discovered that the horse had a great natural affinity for dressage-so that’s what we did. His confidence grew, he was able to accept a rubber snaffle bit and he contested and placed at two national dressage championships. Whilst this was pretty remarkable given his past, it paled into insignificance when compared to his own development. He was confident. He was happy. He had lost the anger, and he developed such self esteem and confidence that he became the top of the pecking order in the herd of horses. Someone had stripped him of his self esteem and his dignity. It took me many years, but I gave it back to him.

More recently, I faced the worrying prospect of needing to swap my horses around in their social pairs. My retired homebred event horse is small and peculiar, and as a young horse he was always bottom of the pile in the herd hierarchy. Whilst he remains quite aggressive with humans, he was always horribly passive with other horses. Due to a history of extreme self harm, this horse has spent most of his life with a small, elderly companion pony. Now I was facing having to put him with a dominant alpha mare.

He is so loved, this odd little horse. I made so many mistakes with him, and he has taught me endless amounts over the years. He is my best friend and my favourite person, and I make sure that even now in retirement, that I make time just to be with him. The time came to introduce him to his new companion, a large and very opinionated mare with attitude to burn. Peeping through my fingers, I witnessed the most amazing thing. The previously cowardly little horse stood his ground. He was not aggressive, but he was quite clear in his message- “I am the top dog”. The usually forceful mare dropped her head, and proceeded to follow behind like a lamb. Seeing my little horse act with such self assuredness was quite a thing. He believes in him. He knows that he deserves to be respected, without needing a fight to prove it. There’s a lesson in there somewhere.

Interacting with our horses in a way that gradually encourages them to see themselves differently is a tremendous privilege. It is a gift to the man just as much as it is a gift to the beast. The horse truly must be allowed to keep his dignity.