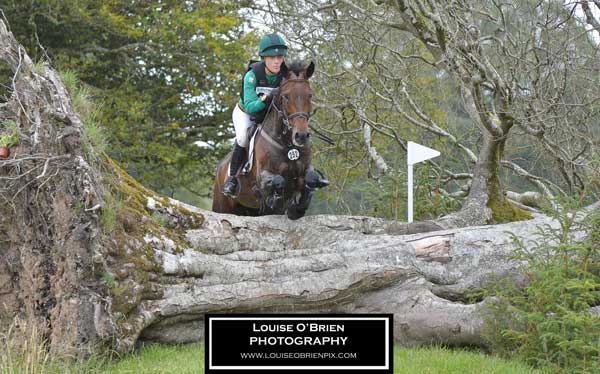 Eventing is a truly unique and diverse sport. Riders and horses of every sort, colour and creed enjoy the challenges that eventing brings, and throughout its history there have been many non-conformist success stories that capture the minds and hearts of participants and spectators alike. Horses such as Charisma, Murphy Himself, Just William and Mulry’s Error have firmly established themselves in both the history books and in the affections of the eventing community, with celebrity status and a large fan base. One of the most popular horses currently competing on the international circuit is the diminutive Irish team horse Portersize Just A Jiff. Barely 15.1hh in his shoes, ‘Jiff’ has taken his rider Camilla Speirs from the Pony Club to the Olympic Games and at 16 years of age, is performing better than ever.

Camilla and her mother Bridget purchased Jiff from the powerful Galway based showjumping producers, Bourns Sports Horses. Richard and Deirdre Bourns were initially not keen to sell Jiff, but Camilla said that from the minute she sat on the then 4 year old, she knew he was the one that they should buy.

The Bay son of the Connemara stallion Crosskeys Rebel is out of a sports horse mare called Mizen Talent and at time of purchase he was measuring a perfect 148cms – ideal to produce and contest pony eventing classes, with a view to selling him on as Camilla moved into the junior ranks. Jiff however, had other ideas.

“He just started to grow!” says Camilla. “He got up to 15.1hh and stopped, so I decided to keep going with him.” The rest as they say, is history.

Jiff has contested a major championship every single year since he was six years old, with the exception of 2013 when he was recovering from injury. Junior Europeans, Young Rider Europeans, Senior European Championships, the World Equestrian Games and the Olympics are the highlights of Jiff’s resume, which also boasts many wins and top placings at 3* level and some superb performances at 4* level.

I asked Camilla what it is about Jiff that sets him apart from the rest and makes him able to tackle the toughest of courses with such consummate ease.

“His attitude. He has an amazing attitude and always has had – from day one. He has so much heart and the most brilliant brain. We did our first Badminton together when he was just 10 years old and I was just 18 – it might not have looked like the best idea, but he skipped around and made it feel easy. I had no idea when I bought him what a 4* horse should feel like ,but he is certainly it! He has so much scope and we have a great partnership together.”

Camilla and Jiff have been selected as travelling reserves for the Irish team at the Rio Olympics. They contested the London Olympics in 2012, but the highlight of their career together sadly ended in disaster when a tiring Jiff misread a fence towards the end of the course and suffered a heavy fall.

Complications during his rehabilitation would have spelled the end for most horses, but Jiff is far from normal. His teak-tough resilience, combined with round the clock care from Camilla, Bridget and their support team saw him back on the eventing trail in late 2013. A superb performance at Boekelo saw Jiff announce his return with a brilliant seventh place finish in the 3* class. The little Irish pony was back with a bang.

2016 has so far seen Jiff in the form of his life. Now aged 16, he looked the pick of the entire field as he blitzed around Badminton 4* in May. His final day performance in the showjumping arena was just breathtaking. Camilla had refrained from putting Jiff forward for Olympic selection until after Badminton, when she was sure that he was firing on all cylinders and keen to do the job. As a combination, they look better than ever before.

“We have matured as a partnership and I have matured as a rider. I have developed and settled into my own style of doing things and I now feel confident within that on all of my horses. I spent some time with Chris Bartle last winter which was a huge help to my cross country riding in particular. The Rio Olympics is a completely different situation for me – I was so young at London and I was riding to team orders to try and get near to the elusive time allowed on the cross country. I didn’t know the things that I know now and it was a huge learning experience. With Jiff,I now take it steady early on the cross country – at Badminton this year, I was about 20 seconds over the time on the first part of the course – I know that Jiff will build and build as he goes around and the time is rarely an issue for him ridden like this. He is my learning horse. It hasn’t all been smooth sailing but we are so comfortable together now.”

Camilla says that Jiff is a straightforward horse to look after on the ground, but not always so easy to ride – “He doesn’t go on the bit, ever….!” But he knows all of the tricks and he loves to go to work every day. He is a brilliant traveler – so important with the impending flight to Rio. Their story together is an absolute fairytale and this tough little campaigner has much more to come. He has thrown the rule book out of the window and continues to inspire and delight on his journey as a modern day eventing superstar.