Based between his home in Malahide, north Co. Dublin and a second yard in Belgium where he focuses his winter operations, Barry runs one of the most successful Showjumping dealing yards in the country.

Many high-profile horses have felt the influence of Barry’s business acumen and as the inspiration behind the involvement of economist Jim Power in the strategic planning for the equestrian industry as a whole, we are all starting to see the potential benefits that knowledge, insight, dedication and a desire to make things better can bring.

Following last month’s highly successful Horse Sport Ireland Marketing Symposium and with our current focus on breeding, we spoke to Barry to hear his thoughts on the state of the equestrian industry in Ireland and more specifically his thoughts on breeding showjumpers in Ireland. Part 1 of a 2 part interview.

When is the Jim Power report due to be published?

Hopefully very soon. We are just waiting for the UCD figures as that’s the census and the basis for everything else. It’ll be in plenty of time for us to work on our pitch to the government for the budget.

But it’s important to remember that we don’t ‘deserve’ anything. We’ve got to earn it with facts and figures and we have to up our game everywhere – whether you’re running a hunt or a gymkhana, a pony club, a big or small show, a yard, whatever. Everyone is responsible for the success of the industry.

For example, let’s say you’re a breeder in Fingal. Yes, every breeder dreams of breeding the superstar that’s worth a lot of money. But not every horse turns out like that. Within 2 hours of Fingal there are a lot of people that buy cheaper horses – maybe €5-15k. I call them ‘missers’ in breeding – they’re just horses, but there’s plenty of people that want them. So, keeping the pony club, the riding clubs, the hunts etc going in Fingal is important to you as a breeder and it’s important to me as an employer – it’s up to us all to help out at local shows and give advice and time to help the industry as a whole.

Ireland sold the most expensive horse in the world last year, it came from Tipperary. Our Olympic medallist comes from Meath, our World Champion comes from Down. We have more riders inside the top 50 than any other country in the world and we’re beating the Americans with all their money, the Germans with their training, the Dutch with all their horses and we produce the best eventers on the planet.

But unfortunately we look for scapegoats – ‘it’s because of the HSI inspections, the SJI…’and so on. Yes, all that can be better. Ireland has got where it is today without really trying, we’ve achieved so much, but there’s so much more that can and should be done. Internationally the industry has changed and become much more professional, and we must too.

I’d like to see the SJI have a bit more money – there are very few really good shows and that’s what’s killing us. The lack of shows needs to be addressed, but there’s no point in just throwing stones at them, they actually need us to help.

The SJI does have it hard as the show calendar needs to be improved and organised, but that will cause World War 3! There are some shows hanging on to dates that don’t have life in the committee or don’t have the ground conditions anymore and they shouldn’t hold up a good weekend date. It’s a terrible thing to say to a long running show that they can’t run it, that we’re going to run up the road instead. But to be honest, they should know it themselves. They should know that things aren’t up to scratch.

Is there anything being done to encourage people to get involved at that level?

More people are needed on the ground and we definitely need to encourage that. I think if you bring in the prize money things will start to change…

For example, if you have a big 3 day show with €50k in prize money and some English coming over, have a big Grand Prix, a big LED screen, lots of hype, a good course builder, great tracks and make sure it’ll be a bit of craic. The next minute everyone is interested in Showjumping and wants a piece of the action. Everyone wants to be the course builder, everyone wants a free ticket in, the kids want to bring their ponies so they’re walking around in breeches. That kind of thing will bring it in.

It’s very hard to ask for a prize money fund for sport. We’re pitching against hospitals, transport etc. But if we do it right we’re creating an industry where we’re exporting horses and taking money from abroad and that’s taxable money. We can generate way more income and therefore tax that will see the level of contributions to the local and national economy go up and that we can sustain going forwards.

It’s more employment – upskilling rural Ireland. Our national equestrian abilities are a national resource. We need everyone to up their game a little bit, but we’ve lost a little bit of belief in the system here.

It’s a difficult situation because the industry was hit very hard here by the global recession and shows are finding it very hard to get prize money. And a lot of the show committees are finding it very hard to get people to help. They need to modernise, but there’s no young blood on the committees to help. The younger guys are on Facebook and Instagram and think the grass is always greener. But the Irish are taking on Cheltenham from the fields of Ireland. We take on Ascot with top horses from Ireland. You can do it from here in Showjumping too.

If there was one thing you could change in the industry here overnight, what would it be?

The infrastructure of the shows – the facilities. We can’t go on the way we’re going. It’s at a tipping point. But it won’t be easy to do. Venues need to be tiered, so we need to pick 5-6 top venues to develop, then have 10-15 underneath, then 20 or so under that. And then there’s the gymkhanas and local venues and such like. But people will just have to swallow the fact that resources need to be concentrated and not every venue can or should benefit – we need top places, for the good of the industry as a whole.

We have the jobs, exports and inward investment – that’s people coming in here from overseas with their money for riding holidays or to try horses to buy. People landing at the airport or coming in on the ferries. We need to convince the government that if they give us money, these 3 areas will increase. If we run 3 or 4 big events around the country and show that we can bring in a couple of thousand more visitors to the country, sell a couple of hundred more horses and employ a couple of hundred more people, then the industry is worth putting money into.

What we want is very basic. Aside from investment in infrastructure, we need educational type programmes like groom’s certificates. About 80% of those you employ in your stable are learning. If you’ve left school at 18 and you go to work with horses, at the end of 2-3 years you should have gone to college for a week here and there over the period, done a vet course and then you get a certificate and you’ve something to show at the end of it. So, your employer does something for you and you do something for them.

We also need 3 or 4 seminars like the recent HSI marketing symposium a year! We need to get people like Eddie Macken and get some horses in and loose jump them and ask what he thinks and what he’d do with them. The place would be packed!

I would like to run one for grooms and riders getting into the sport horse industry. Bring the likes of Scott Brash over and ask him how he started and how he has achieved success. But you need them consistently. These events are fantastic for networking too, that’s almost the most important part of the day.

What impact do you think Brexit is going to have on the industry here?

You know, when we were fighting the English, we sold them horses. When we had troubles in the North we sold them horses. We went to Balmoral show and we were looking down across the border during the 20 years of troubles…we traded across the border during the troubles regardless. I can’t see the Irish not wanting to sell the English horses and the English not wanting Irish horses. Where there’s a will there’s a way. Even if the exchange rate goes even further against us, they’ll find a way.

If you think about it, Irish horses devalued once we went from the punt to the euro. A thousand pounds was a basic horse, now it’s 1,000 euro.

Britain is an animal of a country – there’s 64m people in the UK. They’re not going to stop eventing, so they’re still going to need the horses. The English love their horses as much as Irish people. It’s in their nature. They’ll mortgage their house and buy a horse, sell the car, stop going on holiday. It’s not going to stop overnight. We sold them horses over 100 years through bigger problems!

That’s all as long as the movement of horses is maintained, of course. Movement is key. If it becomes over bureaucratic and there are 3 hour customs delays on each side of the ferries, then people won’t want to base horses here.

Finding and breeding the champions of...

What top riders are looking for in their top horses For such a small nation, the Irish punch way above their weight on the world stage. This...

Ireland is full of small scale breeding enthusiasts. With a handful or mares, or perhaps even just one (like myself) such breeders are often...

Barry O’Connor on breeding and producing...

Following on from our previous interview with renowned Showjumping producer Barry O’Connor where we discussed the state of the equestrian ... 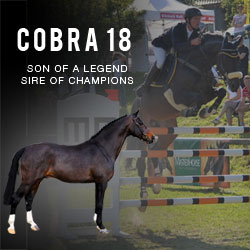