Padraig McCarthy is one of life’s great achievers. He finds himself on the eventing high performance squad for Ireland with his eye firmly on getting to the Rio Olympics, and he has travelled a road less ordinary to get there.

The 38 year old Tipperary native is based at Warren Farm in Devon with his wife Lucy (nee Wiegersma),herself one of the top lady event riders in the world and a veteran of many championships and 4* competitions. They have a beautiful son Tomas, who is almost ten months old. Together Padraig and Lucy run MGH Sports Horses at Warren Farm in Devon and together they have produced many successful international horses.

Padraig began his equestrian career as a showjumper. He has trained with some of the best in the business including Rolf Goran Bengtsson, Max Hauri and Hans Horn. For ten years, Padraig competed across Europe and America before deciding on a return to education in 2003. He graduated from university with a first class honours degree in economics and finance with German. He went on to achieve a PhD of business insolvency laws in Ireland and his work was published in book chapters and academic journals. Horses were never far from his mind and Padraig began eventing in 2011, competing in a BE100 at Bricky on a horse called Philadelphia v.

“It wasn’t really a conscious choice to leave showjumping and take up eventing,” he explains. “the set up at Warren Farm has an infrastructure geared towards eventing. Between Lucy, my father in law Hendrik, the late Caroline Creighton who we so sadly lost last October and the whole team here, there is a depth of knowledge and a system that works for producing event horses.” 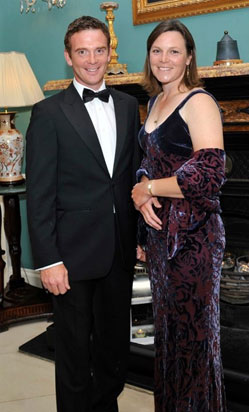 Padraig’s wife Lucy is one of the most respected and highly regarded riders in the business. She is the only rider to have won all three national eventing titles – junior, young rider and senior. She has won Bramham, Blenheim and Blair and was second at Badminton in 2008.

She was listed for the Beijing Olympics, which she sadly missed due to horse injury. In 2013, Lucy travelled to the European Championships at Malmo, Sweden with her horse Simon Porloe, who is owned by Sarita and Christopher Perkins. A superb dressage performance got things off to a great start, but a horrible fall on the cross country course brought an end to Lucy’s competition. Lucy took Simon to Blenheim and Pau, but he clearly wasn’t enjoying himself. She downgraded him to contest the 2* at Fontainbleu but again, the horse wasn’t comfortable.

A combination of factors came into play which led to Padraig making acquaintance with Simon. The horse was undoubtedly struggling with his confidence and really needed to start again if there was any hope of him regaining his previous excellent form at 3* and 4* level. Padraig was just starting out on his eventing journey and although he was enjoying great success producing young horses, he lacked a top level ride. The logical decision was made for him to take the reins on Simon and see where it might lead. They very quickly qualified up through the levels, building and improving all the time. Suddenly, Rio looked like it might just be a possibility……

In 2014,Padraig contested his first 3* at Blair aboard Simon, finishing in 22nd place. Next stop Waregem where they finished in 10th place. In 2015, they finished 4th in the prestigious Grantham Cup at Belton before finishing 19th at Saumur, 8th at Barbury and 17th at Aachen.

They then travelled to the European Championships at Blair as part of the Irish team. Morale was high and the team got off to a great start in the dressage, before having an absolute nightmare on the cross country course. Padraig and Simon were looking exceptional and at their ease, before a shock fall put paid to their chances. They regrouped and finished the year on the ultimate high as a part of the winning Irish team at Boekelo, recording the country’s first ever nations cup victory. 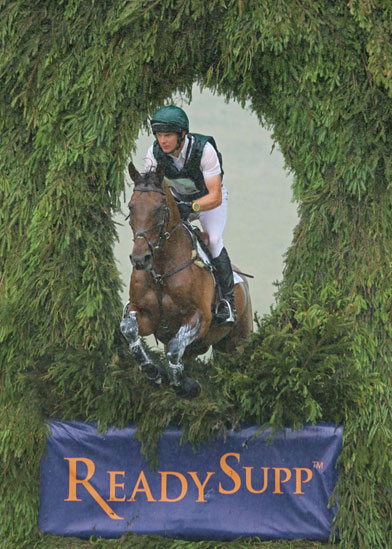 Image with thanks to Lorraine Porter Photographer

Now part of the Olympic squad, Padraig and Simon have been busy with high performance training over the winter. The plan this year is to head to Aldon for an OI,Fontainbleu, Belton and then Tattersalls, where a good result will be essential for team selection for Rio. I asked Padraig what Simon is like to work with –

“He’s very rideable in his own way. He’s a bit lazy, a bit spooky and a total diva-we call him ‘Super Simon’. He is in very good form. He’s 16 now and he knows the job inside out so I never ride him more than two days a week in the arena. He does a lot of hacking and he does his fast work – it’s important to keep a horse like him interested and enjoying himself”.

MGH Sports Horses is primarily a producing and selling operation, with some exceptional horses across the levels for sale. As well as having a keen eye for a marketable prospect, Padraig and Lucy are also building a nice team of horses to compete.

One particular horse that Padraig is excited about is Bernadette Utopia, a 10 year old mare by Colandro owned by Hendrik Wiegersma, Pearl Chaffe, Padraig and Lucy. She has achieved some excellent placings at intermediate and 2* level in 2015 and heads to Barocca for the 2* there. Lucy currently has Mr Chunky at 4* and a very smart 7 year old called MGH Annaghmore, by Heritage Fortunas who is owned by Huw Lloyd, Padraig and Lucy. He recorded several good placings at Novice level last season and looks like one to watch.

With a quality breeding operation also in place, MGH Sports Horses will no doubt keep producing the goods for many years to come. Here’s hoping that all roads will lead to Rio for Padraig and Simon.