Horseware Lukeswell and Sam Watson – the right horse, the right rider and the right time.

Horseware Lukeswell and Sam Watson – the right horse, the right rider and the right time.

Irish eventer Sam Watson had a remarkable year in 2015. Best known for his solid partnership with the evergreen Horseware Bushman, Sam has carefully built up a team of superb horses since London 2012 and looks set to be a force to be reckoned with in the years ahead.

London was undoubtedly a sticking point in Sam’s career. Horseware Bushman (aka George) performed at five championships in six years and always completed with a counting score. The epitome of a true Irish event horse, George has always been the horse you can count on to dig deep when it matters the most.

Many people were shocked when Bushman didn’t make the team for London, but Sam put it behind him and pushed ahead to Burghley instead. The disappointment of London gave way to far better things for Sam and put him on a path that has allowed him to now be in a very strong position for the future.

Sam married the incomparably fantastic Hannah ‘Sparkles’ Watson – former head girl for Pippa Funnell and a very good rider in her own right – and they relocated permanently to Ballybolger stud in Carlow, Ireland. He also happened to have a very precocious 7-year-old horse in the yard who was starting to look like he was going to be very good indeed. 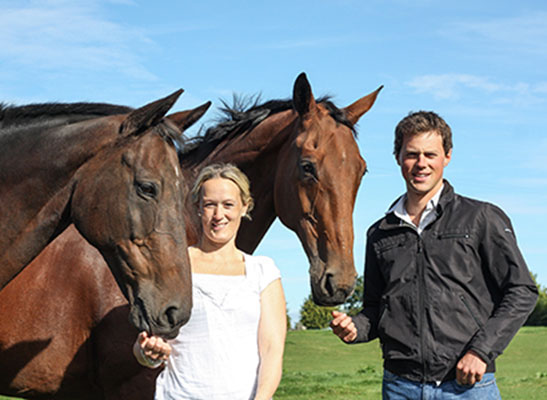 Sam says “After London, I just took a big breath. I moved away from the desperation of it all. I got married, the year after we had our first child and Horseware Lukeswell couldn’t have come along at a better time”

Enter Horseware Lukeswell, aka Bart. Like Horseware Bushman, Bart is by the proven star sire of event horses – Puissance.

Bred by Teresa Walsh and owned by Stephen Lanigan O’Keefe, Bart arrived at Chez Watson as a four-year-old. Horseware came on board when Bart was six and there has been no stopping them since.
Like George, Bart is consistent across three phases – the best asset any event horse can have. In 2014 Bart burst onto the international scene at Camphire with a brilliant win in the 3*. Suddenly, everyone was looking.

2015 continued in the same grand style that 2014 had left off in and Bart won the A/CNC 2* at Tattersalls and finished 5th in very difficult conditions in the 3* at Camphire. The Irish team High Performance Manager Nick Turner told Sam that there was a place available at the Europeans, so Sam decided to press the horse a little bit and see what he had. The horse was superb – just like his predecessor George he made nothing of the mud and the rain finishing 5th and his European Championships place was secured.

It turned out to have been excellent preparation. The European Championships at Blair started well for Sam with a great personal best in the dressage but cross country day brought a huge change in the weather. Rapidly deteriorating ground, poor visibility and a course causing carnage would have been enough to worry any rider, but Sam has had to deliver many times in similar conditions. He gave the horse a typically class ride, allowing Bart to grow in confidence all the way and by the end of the course it became clear that this horse was something special.

Sam continued “It was the way in which he did it. Some horses might have jumped around that track and you’d know they’d be thinking about it that night. Bart finished with plenty in the tank and the last five or six fences in particular, we really knew what we had”.

Sam finished twelfth individually. Bart was the youngest Irish squad horse and he finished the best of the Irish at the competition. Awesome. He returned home and enjoyed a holiday, before returning to work.

I asked Sam what sort of temperament Bart has and what qualities he possesses that make him such a good horse.

Sam says ” He’s sharp. That’s the best way to describe him. He loves to work and he is enthusiastic. When he was a young horse, you wouldn’t hack him without a neckstrap. Actually, you still wouldn’t-because he’s so sharp! He’s sharp in his mind, but he’s also sharp in his body. He is a real athlete and he’s careful. He has a good technique and he loves to gallop. His natural movement is improving and we are working on his dressage. He feels better again on the flat this winter than he did even last season.”

So what’s next for this superb combination? Sam hopes to go to Belton – “there’s nowhere to hide there”- and possibly on to Tattersalls. The main aim though is the Rio Olympics. With the luck of the Irish and the obvious skill and depth of this partnership, you might even see a medal coming home to Ballybolger. Here’s hoping.

Along with Sam’s other hugely exciting prospect Imperial Sky – another Puissance-sired gelding with several notable placing at 3* level in 2015 – two beautiful sons and his wonderful Wife Sparkles, the future looks glorious for team Watson.

The Irish Society for the Prevention of Cruelty to Animals (ISPCA) received almost 15,000 calls to its helpline and investigated more than 3,000 reports of animal cruelty in 2015