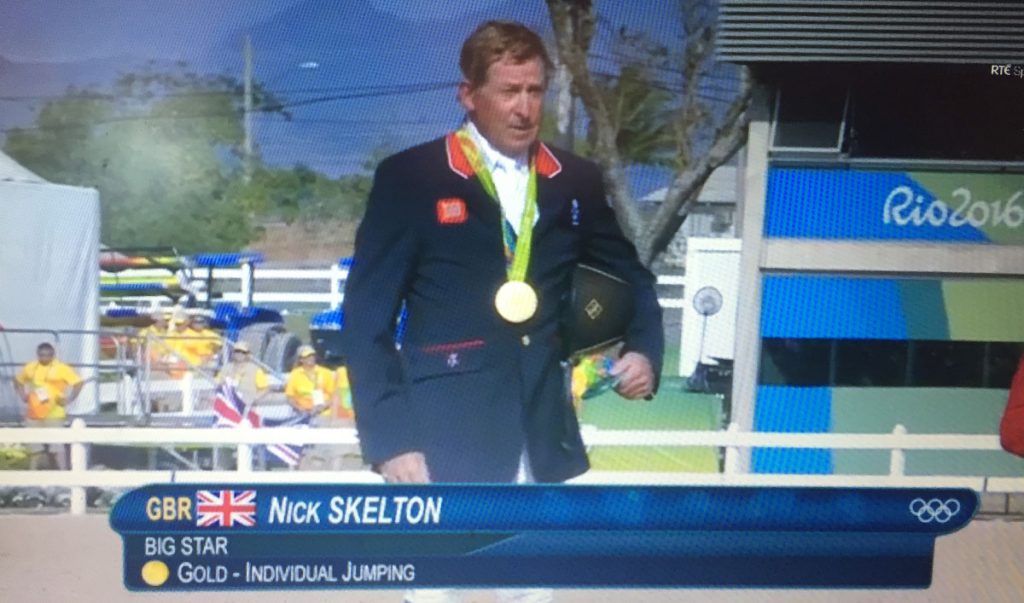 The 1984 film ‘Champions’ tells the story of jockey Bob Champion and the racehorse Aldaniti. Champion was diagnosed with cancer and not expected to survive. Aldaniti suffered a catastrophic tendon breakdown and was not predicted to return to racing. Through dogged persistence and immense determination, both horse and jockey made incredible comebacks and together they won the 1981 English Grand National.

On the 19th of August 2016, one man and his horse enjoyed a similar comeback story in the sport of showjumping.

Team GB stalwart Nick Skelton has been at the top of the sport of showjumping for almost four decades. Horses such as Apollo, Major Wager, Dollar Girl, Hopes Are High, Arko, Carlo and Big Star have helped Nick to achieve his innumerable successes.

Olympic Games, Grand Prix, World Cup Finals, Nations Cups, World and European Championships and Global Champions Tour Wins have been a normal occurrence for the Warwickshire native, a man who can always be relied upon to deliver on the big occasions. Nick has competed at eight Olympic Games in his career, taking team gold at London in 2012 aboard Gary and Beverley Widdowson’s horse, Big Star.

In September 2000, Nick suffered a very serious accident in which he broke his neck. He retired from the sport, but not for long. His recovery was better than expected and the lure of the saddle proved too strong.

Nick returned to competitive action in 2001 and has no plans to retire any time soon. However, he suffers with severe back pain and recently had a metal hip replacement. His body is compromised after over fifty years of riding and working with horses and it is a daily struggle for Nick to keep moving. He now only rides one horse a day. That horse is Big Star.

Big Star is a 13 year old stallion, by the legendary sire Quick Star. He made the step up to top flight competition at just seven years of age and was an instant success. Wins and placings in international Grand Prix led to selection for the British team for the London Olympics. Team Gold almost gave way to individual gold, but a dropped rail kept Nick and Big Star in overall 5th place. Nick was haunted by the result and said many times that the horse should have also won the individual medal.

In August of 2013, Big Star was on the winning Nations Cup team at the Dublin horse show. The horse incurred an injury and missed the remainder of the 2013 season. Big Star seemed to have recovered and lined up for the World Equestrian Games in Normandy in 2014. However, he was struck by injury again and was not seen afterwards until October 2015.

Jumped very sparingly in 2016, Big Star was preserved at all cost for the Rio Olympics. The big jumping bay stallion took his place in South America and although the British Team could not repeat their victory of 2012, Nick made it through to the individual final. By the third round of a nail biting competition, only six remained. First to go, Nick threw down the gauntlet and he was never challenged. He had finally done it. This bionic man and his incredible horse had fought back from potentially career ending injuries and misfortune and in an amazing feat of horsemanship, capped a stunning career with an individual gold medal.

“I have been in the sport a long, long time and to win this now at my age, I’m so happy, it’s just amazing!” said Nick, “I was emotional [on the podium] because I am so happy and it’s been a long time, to do this now is like unbelievable for me. I’ve always wanted to do this and I nearly did it in London in the Individual. I’ve had European medals and World medals but to win this and be lucky enough to get this horse here is pretty emotional for all concerned in my team.”

Securing his Olympic gold medal, Nick becomes the oldest gold medallist, aged 58, for Team GB since 1908; “I’d like to thank the BOA for what they have done getting us here and obviously UK Sport who support the team. It’s nice to be the oldest one.”

Nick has no plans to retire and Big Star looks better than ever. Watch this space!